After the painting by Sir Joshua Reynolds (1723-1792), (c.1775; Mannings, 1734; Petworth House, Sussex). Elizabeth Godden Houghton, daughter of Philip Houghton of Hanover, Jamaica married Sir John Taylor (1745-1786) of Lysson Hall, Jamaica on 17th December, 1778. Standing three-quarter length in a landscape, facing left, resting her left hand on her left hip and looking out at the viewer. She wears a shawl and matching turban with ostrich feathers.

Mezzotint, printed in black ink. Trimmed. Proof before title. Engraved in italics in the margin at lower left and lower right: 'Painted by Sir Joshua Reynolds' ... 'Engraved by W. Dickinson'. Engraved in italics below: 'From an Original Picture in the Possession of Robert Graham Esq.r. of Gartmore'. Trial workings with the rocker seen across the lower margin. Inscribed in graphite at lower right: 'Lady Taylor'. Inscribed in graphite on the verso: '?CBM' [?Charles Brinsley Marlay]; '44'; 'J.C.S. 80 / Lady Taylor'. 'Lady Taylor' is listed in Nagler's paragraph of 'Portraiten nach J. Reynolds' on p.383 and not in Nagler's long list with annotated numbers. Dickinson also engraved a mezzotint portrait of Lady Taylor's husband, Sir John Taylor after Robert Edge Pine (See Notes). Both Pine's portrait of Sir John and Reynold's portrait of Lady Taylor were given by Sir John to his sister, Anne Taylor (d. before 1786) who married, circa 1760, Robert [Bontine Cunninghame-] Graham, 6th of Gartmore (1735-1797). 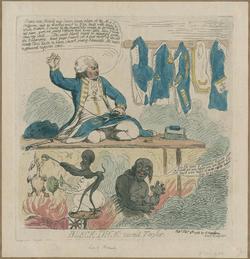 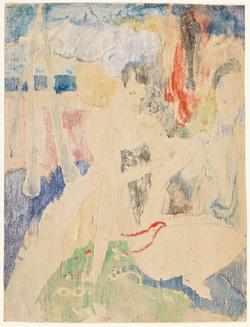 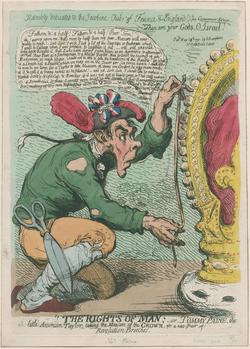 "The rights of man; - or - Tommy Paine, the little American Taylor, taking the measure of the crown, for a new pair of revolution-breeches. 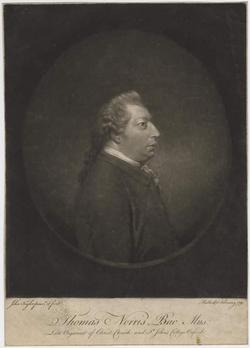 A lady holding a plate with a waffle 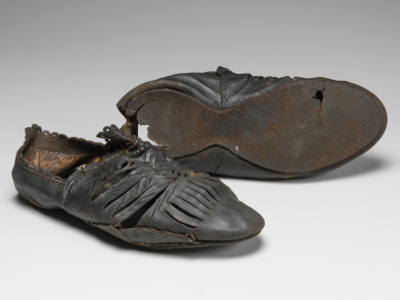