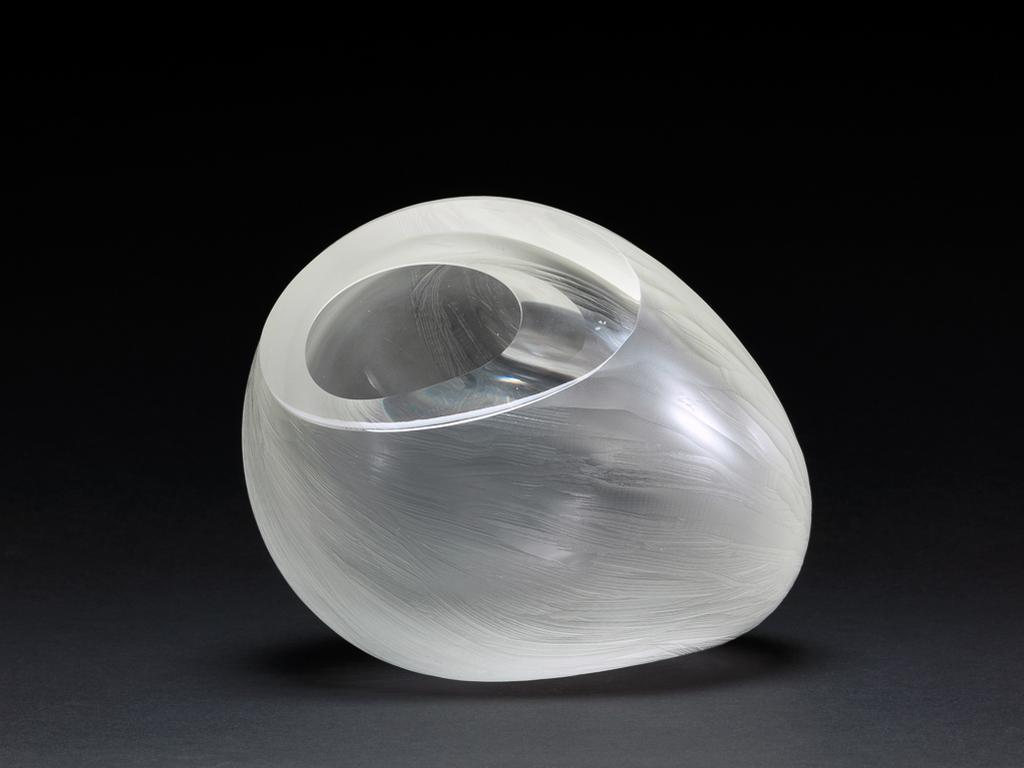 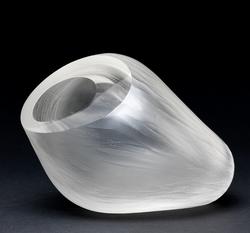 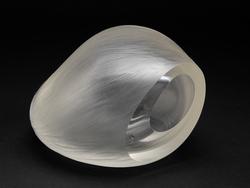 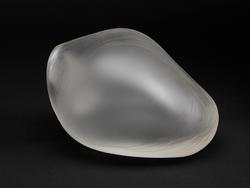 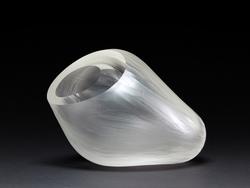 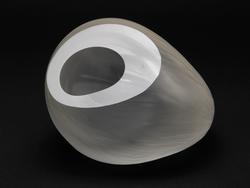 Pebble-shaped form. Thick, clear glass, blown, cut, sandblasted and polished. Hollow pebble-shaped object with flattened underside, cut across one end, and the thickness of the wall polished to provide a smooth frame for the aperture. The exterior is frosted, and apart from an oval area on one side, and part of the base, is engraved with flowing lines, resembling weeds flowing in water or grasses blown by the wind.

History note: Purchased by the donors from the maker at the Chelsea Craft Fair where exhibited 13th-18th October 1998

Text from object entry in A. Game (2016) ‘Contemporary British Crafts: The Goodison Gift to the Fitzwilliam Museum’. London: Philip Wilson Publishers: Catherine Hough was first introduced to glass in the 1970s through enrolling on a short course at the Glasshouse in London. The Glasshouse was a well equipped glass studio that had been established in 1969 in Neal Street by American artist Sam Herman (b.1936), with the support of Graham Hughes, in order to provide a workshop that would act as a halfway house between college and the real world for young graduates. Graham Hughes (1926–2010) was an influential voice in British art and design both as Art Director of the Goldsmiths’ Company (1951–81) and Chair of the British Crafts Centre from 1965. Hough subsequently gained a BA in Glass at Stourbridge College of Art and spent two years as artist-in-residence at Royal Brierley Crystal. She returned to the Glasshouse before establishing a new business, Glassworks, in 1985, and creating an independent studio in 1998. Pebbles and rock formations often influence the shape and surfaces of her works, but it is the qualities of glass as a transparent medium that give full expression to each piece. Catherine Hough: ‘Nucleus represented an important step in my development of asymmetrical free-blown forms using a mass of clear glass suspending a small inner bubble. Techniques such as carving, cutting and texturing with diamond and carborundum wheels, grinding and polishing, sandblasting and brushing are used to manipulate the outer surface into abstract patterns which create shifting reflections of the inner space.’