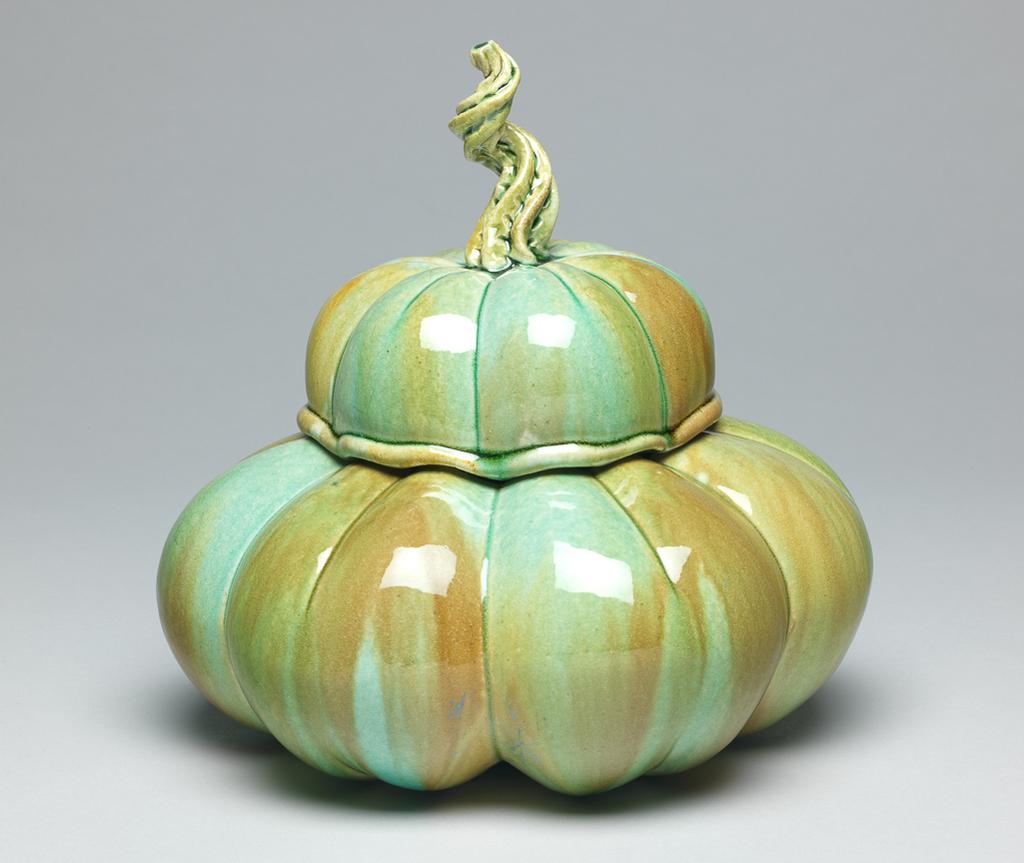 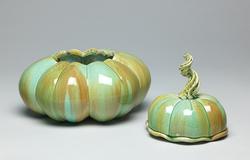 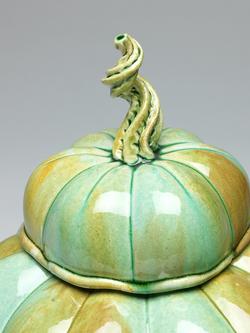 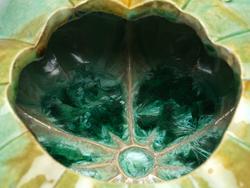 Earthenware (T Material), moulded and hand-built, in the shape of a pumpkin, with yellow, turquoise-green, and green crystalline glazes (one of an edition of 20)

White earthenware (T material), moulded and hand-built, fired to biscuit, decorated with shades of turquoise, green and yellow crystalline glazes, and fired several times. Of six-lobed pumpkin shape, with a crease in the top of each lobe, and slightly convex underneath with a raised circle in the centre. The top is cut out, and is covered by a domed, six-lobed cover with a ridged and twisted stalk serving as a knob. On the lower part of one lobe on the cover and on the upper part of one lobe on the base there is a small raised circle to ensure that the lid and base are aligned correctly. The exterior is shaded in turquoise, green and yellow glaze, with a few crystals here and there. The interior is extremely crystalline. There are ten scars on the base of the pumpkin where it has rested during firing, and six scars on the edge of the cover, which also has three spur marks in the middle.

One of an edition of twenty. The shades of blue and green are produced by copper carbonate and cobalt carbonate added in various quantities to a base crystalline glaze

Text from object entry in A. Game (2016) ‘Contemporary British Crafts: The Goodison Gift to the Fitzwilliam Museum’. London: Philip Wilson Publishers: Kate Malone studied at Bristol Polytechnic and the Royal College of Art, London before establishing her studio in London in 1986. Her fascination with the exuberant forms of nature, in particular buds, seedpods and fruits, has been the abiding influence on her prolific output of ceramic forms. She is an active and fearless experimenter with glaze technologies, drawing on traditions of European ceramics, ranging from salt-glaze wares to Sèvres porcelain. Her studio work is combined with a strong commitment to a range of educational projects with schools and colleges, and her work has been studied as part of the National Curriculum for many years. She has undertaken numerous public commissions including a pair of large vases for the Old Bailey, London and a tiled building facade at 24 Savile Row, London in collaboration with EPR Architects. Kate Malone: ‘In my own ceramic art work I am inspired by the optimism and joy in nature. My forms brim with a sense of growth and aim to communicate this life force to the viewer.’ A life history interview with Kate Malone is available at http://sounds.bl.uk/Oral-history/Crafts. 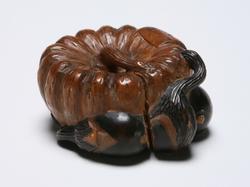 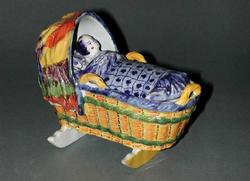 Box in the form of a Baby in a Cradle 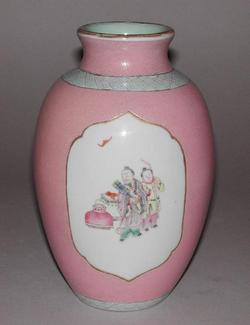 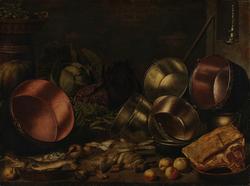