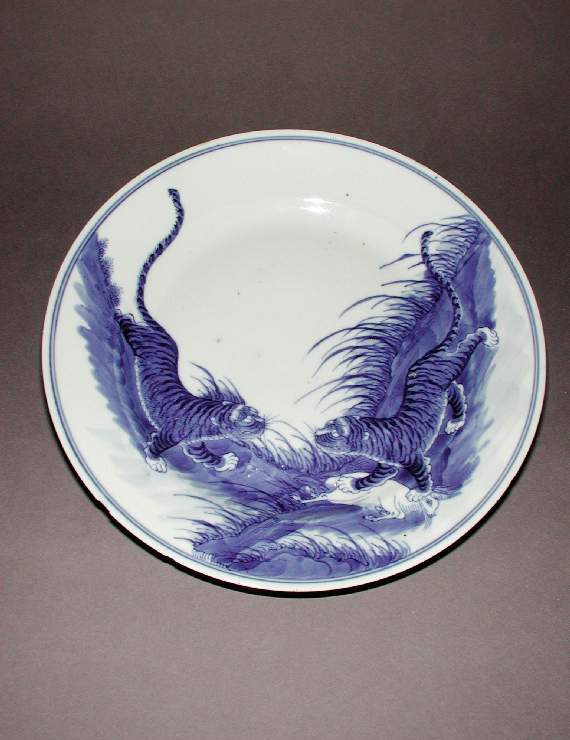 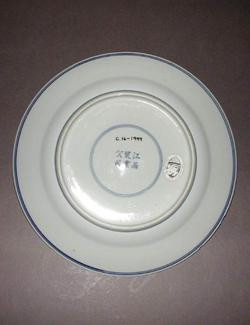 Plate. Hard-paste porcelain painted underglaze in blue. Circular with sloping rim, shallow curved sides, and slightly convex centre, standing on a footring. Decorated on the front with two tigers disputing a dead deer, with rocks and grass in the foreground and long grass behind the tigers, whose bodies and tails curve round the plate. Two narrow blue concentric circles round the edge. On the reverse, there are two narrow concentric circles round the mark, one round the outer edge of the footring and two round the outer edge. The glaze has a few speckles on the front mainly on the white area between the tigers.

Given by Peter Crabbe and Roger Seaton Robinson

Method of acquisition: Given (1999) by Crabbe, Peter and Seaton Robinson, Roger

Made by the Jiangxi Porcelain Company

Inscription present: oval printed in black with an oval scene with on the right part of a bespectacled man's head and shoulders, surrounded by the words 'No' 119' (in red biro) 'VIRTUTIS MR GLORIA MERCES'