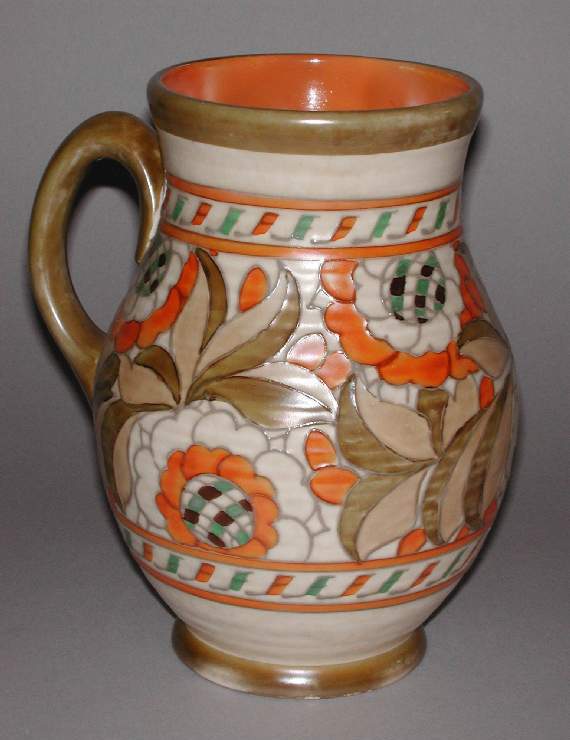 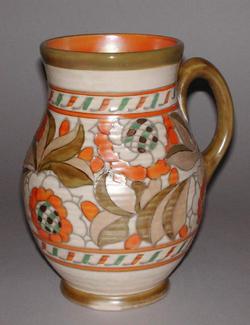 Ovoid shape jug with broad cylindrical neck, projecting footring, and loop handle. The exterior has prominent foot-rings and is decorated round its widest part with a broad band of stylised flowers and foliage, coloured in yellow-brown and orange lustrous glazes and beige and green enamels. Above and below are two orange bands flanking slanting ‘f’s, alternately in green and orange. The foot, rim and handle are a lustrous yellow-brown, and the interior the neck is orange luster, to a depth of 5.5 cm. The underside is recessed and glazed.

A.G.Richardson was based at the Gordon Pottery, Tunstall, from 1915. Tube-lining and decorating continued there when a second workshop, for ‘freehand work’ was opened at Britannia Pottery, Cobridge, in 1934. ‘Crown Ducal’ was the trade name for Richardson’s fancy or novelty ware; otherwise, the main products were breakfast, coffee, dinner and dessert sets.

Charlotte Rhead (1885-1947), also known as ‘Lottie’, came from a family of potters who over several generations built a reputation for tube-lined and pâte-sur-pâte decoration. Charlotte trained at Fenton School of Art and from 1901 worked at a succession of potteries as a decorator. From 1912-1926 she worked for her father, Frederick, who was art director at Wood & Sons, and at their subsidiaries Bursley Ltd and the Ellgreave Pottery Co; some of this work appeared under her own back-stamp as ‘Lottie Rhead ware’. By 1926, she had joined Burgess & Leigh, and from 1932-c.1942 designed art-ware and other products for A.G.Richardson & Co. In 1942 she returned to a Wood & Sons subsidiary, H.J.Wood, remaining there until her death. Although best known for her popular tube-lined designs, Charlotte Read also introduced new shapes and innovative glazes, including ‘broken’ (mottled) glazes and a thick matt white ‘snow glaze’ which attracted interest in the trade press.

‘Tudor Rose’, pattern number 4491, is a variant of Rhead's 'Persian Rose' pattern and was produced in several colourways. It was shown at the 1936 British Industries Fair, and favourably reviewed in Pottery Gazette (April 1936, p.544). The design was produced on tracing paper and ‘pounced’ onto the leather-hard pot to guide the tube-liner. The jug shape is number 146.

Inscription present: (letters in script, with crown above) 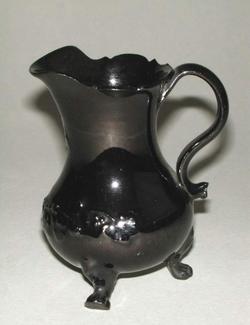 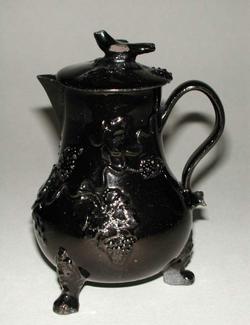 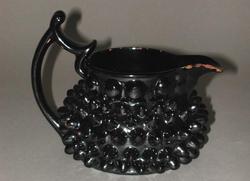