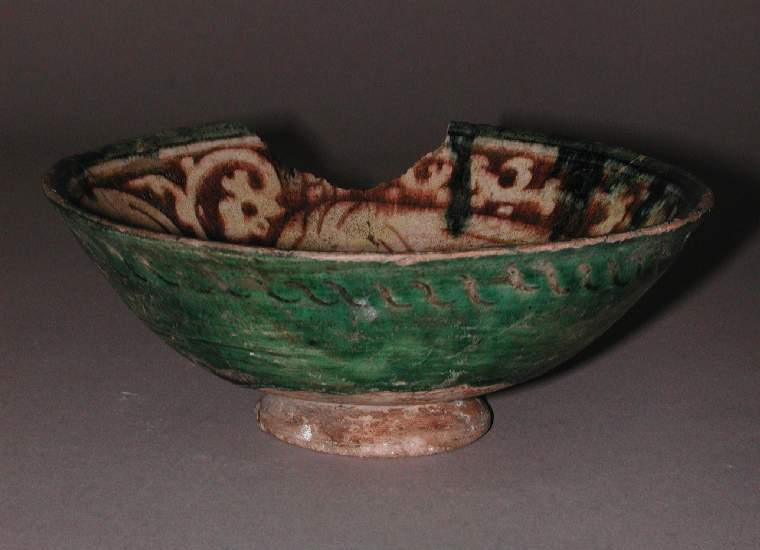 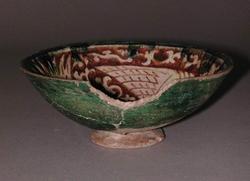 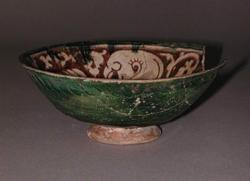 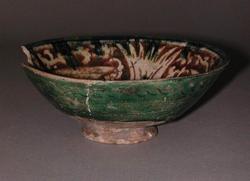 Pinky-brown earthenware, wheel thrown, coated in cream slip painted brown and green under a clear glaze on interior. Exterior has an incised cream slip under a green glaze.
Shape: Finely potted segmental bowl with a plain rim and an angled disc base.
Interior: Cream slip coating decorated with a spread eagled bird using brown paint in reverse. The features of the bird, beak, eyes and a neck collar, are painted in brown. The bird is decorated, with two trefoils at each shoulder and a scalloped line on the central body, both formed with green paint outlined in brown. Scrolling vegetal decoration in brown paint surrounds the bird. Around the rim a concentric band of green painted decoration has run at irregular intervals over the cream slip immediately below it and occasionally into lower painted designs. On the bird’s body, in the centre of the bowl, three spur marks are clearly visible, probably resulting from the use of a tripod stacking device during firing.
Exterior: A cream slip coating underlies green glaze which runs over the upper three quarters of the body, pooling slightly in places just above the base. Under the glaze, just below the rim incised reverse ‘S’ shapes form a repeating pattern.

Throwing : Pinky-brown earthenware, wheel thrown, with cream slip painted in brown and green under a clear glaze on the interior. Exterior has an incised cream slip under a green glaze.