Pale blue stoneware, relief-moulded, mounted with hinged Britannia metal cover with thumbpiece. The body of the jug depicts knights in armour, some standing, some jousting on horseback, between an upper border of moulded gothic window tracery and corbels and a lower borders of gothic fleurs-de-lys and grapevines.

Pale blue stoneware, relief-moulded, mounted with hinged Britannia metal cover with thumbpiece. The body of the jug is approximately pear-shaped with an upward flaring lip and a vertical band below the angular handle. It stands on a low circular pedestal foot with twelve alternately curved and straight facets round the edge. The side of the body is decorated with knights in armour, two standing, two jousting on horseback, either side of a striped tent, between an upper border of moulded gothic window tracery and corbels, and a lower borders of gothic fleurs-de-lys and grapevines. with window tracery below.

History note: The family of the donor, Dr Robert Ridgway

Given by Dr Robert Ridgway

The 1830s witnessed a revival in interest in the Middle Ages, especially tales of romance and chivalry. On 28 August 1839, Archibald William Montgomerie, 13th Earl of Eglinton and Winton, hosted the famous Eglinton Tournament, at Eglinton Castle, Ayrshire, Scotland, in which the Earl and his guests dressed themselves in medieval-style costumes and took part in processions and competitions. Torrential rain spoiled the first day, and the jousting and melée took place a couple of days later. The tournament was open to the public and attracted tens of thousands of spectators but was arguably a deliberate set piece of romanticism in the face of the widespread social and ideological upheaval experienced throughout Europe during the 1830s. A variety of commemorative souvenirs was produced, including textiles and ceramics, including a range of moulded jugs, in different colours and sizes, by Ridgway Son & Co. This is a particularly large example, and is also mounted. 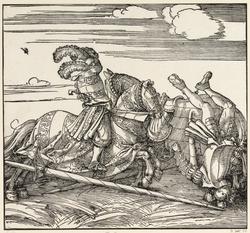