Beer jug. Relief-moulded buff earthenware, the interior slip-coated in white and the whole covered with very slightly bluish-grey tinted glaze. The jug has an ovoid body with a short cylindrical neck, and projecting spout, moulded in two halves. The handle is in the shape of a tapering hop branch which extends on each side of the neck into relief spray of hops and ears of barley corn. The lower part of the body is gadrooned. The underside is slightly recessed and glazed.

History note: Purchased by the donor from an antique shop in Catford, c.1950.

Given by Mrs Valerie Kessels

Method of acquisition: Given (2002) by Kessels, Valerie, Mrs

Relief moulded jugs were popular in mid 19th Century homes. The smear-glazing makes the most of the way that colour-stained clays show off crisply-moulded ornament, whilst the stoneware would be durable in an everyday setting. There are several examples in the Fitzwilliam Collection. This jug’s hop and barley design indicates its function as a beer jug.

The Society of Arts, founded in 1754, ran its first competition for arts and manufactures in 1846. Encouraged by Henry Cole, Herbert Minton submitted two beer jug designs, winning a silver medal for pattern number 268, a white stoneware jug with a blue stained neck and a relief moulded frieze of hops and barleycorn in white. The design was registered in May 1846. This buff earthenware version, no.279, bears the impressed year cipher for 1848. The jug was also produced in white and olive colours and in a Parian version (no.319) with a perforated filter before the lip and a lid.

This is one of the earliest examples of ware carrying the Minton name (here ‘M & Co.’), as identification of the factory was required for the competition. The business was founded in 1793 at Stoke-on-Trent by Herbert Minton’s father, originally producing transfer-printed earthenware and, from 1797, porcelain. Having traded under various names, from 1845 it was known as ‘Minton & Co.’ and from 1873 as Mintons Ltd. 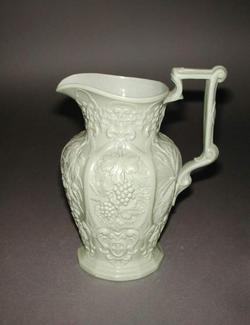 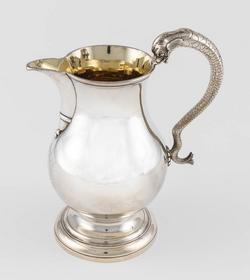 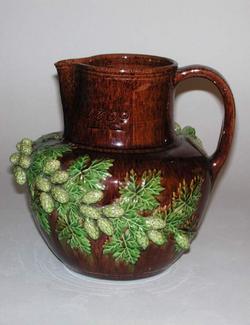 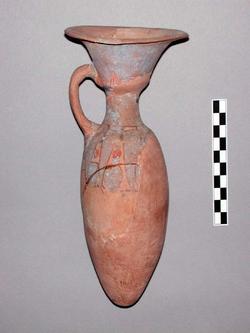