The Contest between the Muses and the Pierides: EC.35-1942 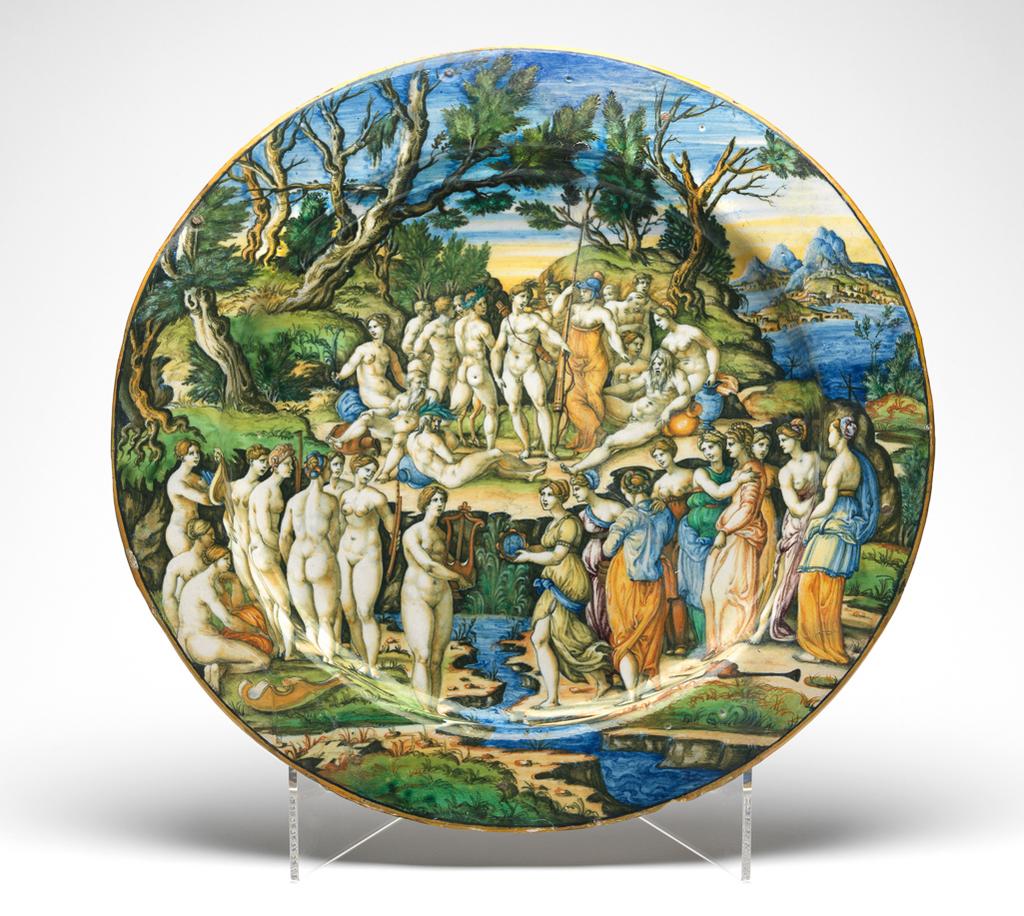 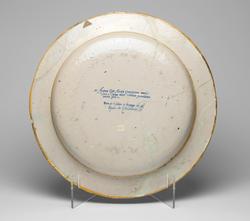 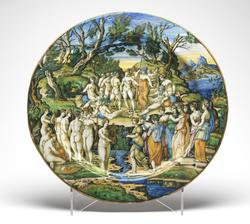 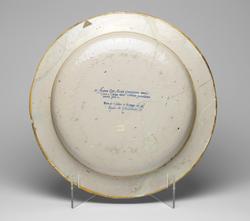 Maiolica dish, painted in polychrome, with The Contest between the Muses and the Pierides.

Pale buff earthenware, tin-glazed on both sides; the glaze on the reverse is pale beige and speckled. Painted in blue, green, yellow, orange, beige, brown, manganese, black, and a little white high-lighting. Shape 64. Circular with narrow rim, and wide, shallow well. The Contest between the Muses and the Pierides. The nine daughters of Pierus stand on the right separated by a stream from the Muses, led by Callipte who holds a harp. Above, a group of nymphs, gods and goddesses, including Apollo and Minerva, serve as judges. In the landscape background there are stunted trees on hills, and on the right, a coastline with buildings and distant mountains. The edge is yellow. The back is inscribed in the middle in blue, 'Ausae Cum Musjs Committere proelja/Voce Victae nunc Volitant jmmitantes/omnia pjcae/Fatto jn Urbino in Botega de Mo (o raised)/Guido da Casteldurante' (Having dared to have contests with the Muses and defeated by voice, they now fly away as magpies imitating everything). Single yellow bands encircle the junction of the rim and well, and the outer edge.

Although the attribution to a workshop in Urbino is secure, the identity of the painter has been the subject of speculation. Orazio Fontana , Guido da Urbino's son, can be excluded because the painting on the front, and the handwriting on the back are far superior to those on a dish decorated with this subject which bore his monogram, which was formerly in the Schlossmuseum, Berlin but was destroyed during World War II. Bernard Rackham in 1940 considered that it might have been painted by Camillo Fontana, and in 1987 J.V.G. Mallet proposed Camillo Gatti as a likely executant. Another dish decorated with this subject in the same workshop was formerly in the collection at the Hôtel Lambert, Paris, sold at Sotheby's Paris on 11 October 2022. It is inscribed with the subject, the date, 1539, and 'In Botega de Mo Guido/de CaSteldurati' (In the workshop of Maestro Guido of Casteldurante). See Documentation.

The literary souce for the story of Muses and the Pierides was the Roman poet Ovid's Metamorphoses, Book V, 294-678. The nine daughters of Pierus, King of Emathia, overconfident of their musical talent, challenged the Muses to a singing contest. After all the contestants had performed, the adjudicating nymphs declared the Muses the winners. The Pierides unwisely clamoured against their decision, and as punishment for their presumption and rudeness were transformed into chattering magpies. 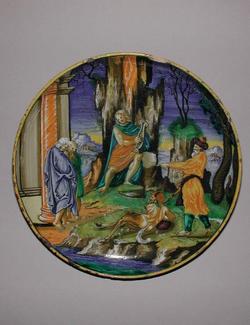 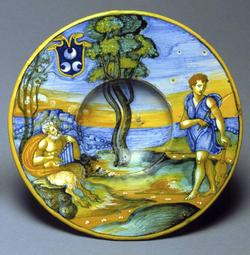