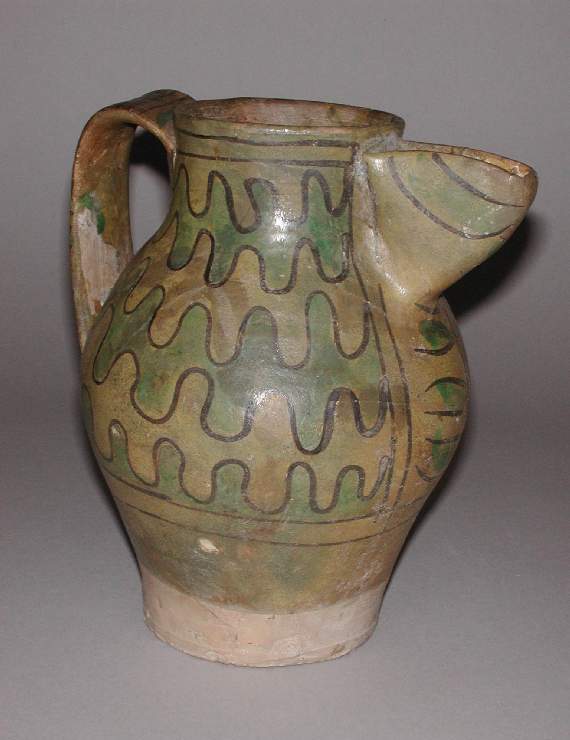 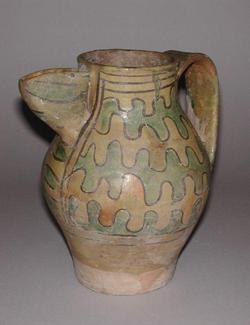 Pale buff earthenware, the base and short distance above it unglazed, the rest thinly covered with yellowish lead-glaze. Painted underglaze in dark manganese, and copper-green which has run. Shape 2. Swelling ovoid body with flat base, cylindrical neck, applied folded spout and strap handle. The spout and handle are flanked by two vertical manganese lines forming side panels, each occupied by two wide black-edged green lines undulating on both sides, and one undulating on one side. The lower part of the body and the neck are encircled by two manganese bands. On both sides of the spout, and below it on the front, there are horizontal lines of alternate colours, and on the handle, four groups of three manganese horizontal lines alternate with four wider green.

The decoration resembles the heraldic field described as barry nebuly or ondy, but probably had no heraldic significance.A variant of it appears on C.17-1991.

The earlier ownership of this jug probably indicates that it was made in Orvieto, but the decoration also occurs on vessels from Rome, and Viterbo in Northern Lazio. A jug similarly decorated but with spots instead of continuous colour between the lines, was recovered from cistern C of the Palazzetto Faiena in Orvieto.

except the base and short distance above it Lead-glaze Earthenware