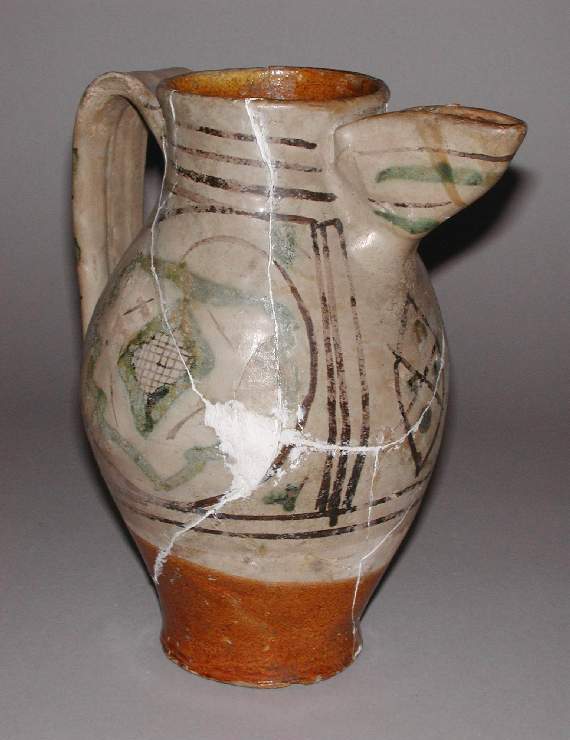 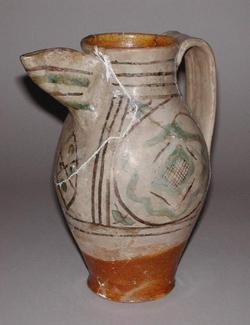 Light yellowish-buff fabric, the interior and lower part of the exterior lead-glazed yellowish-brown; the rest tin-glazed ivory. Painted in copper-green and manganese-brown.
Shape 7. Ovoid with flat base; cylindrical neck expanding slightly towards the rim; broad strap handle; spout made from a strip of clay, folded and pressed to the neck.
The spout and handle are flanked by three vertical manganese lines forming side panels, each containing four small leaves in the corners and a spiral stem bearing a stylised flower in the centre. On the front, there is an almond-shaped motif with a saltire cross over it and green spots in the four quarters. Below are two horizontal manganese bands, and on the neck, four. The spout is decorated with horizontal stripes of alternate colours and the handle with alternate oblique stripes.

The motif under the spout also occurfs on C.112-1927 and on many other Orvieto jugs of various forms, sometimes closer tgo a lozenge in shape and without the nspots in the four quarters.