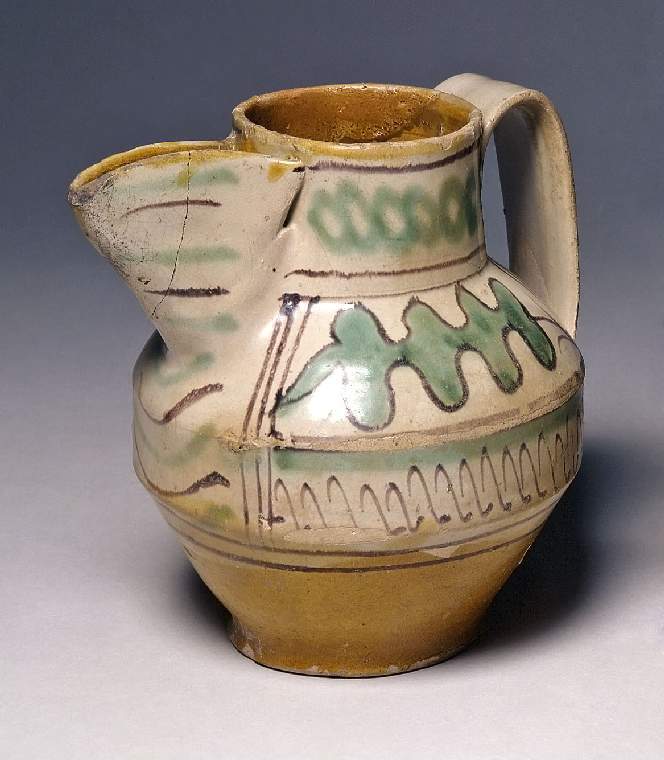 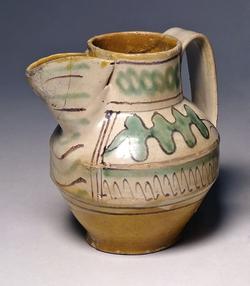 Cream earthenware; the interior and lower part of the exterior are lead-glazed brownish-yellow; the rest is tin-glazed greyish-white. Painted in manganese and green.
Shape 9. Globular body with projecting disk base, and restriction round the widest part; broad strap handle; spout formed by a strip of clay folded and attached to the cylindrical neck.
The spout and handle are flanked by three vertical manganese lines forming panels on the shoulders, each containing a large horizontal oak leaf; on the restriction, there are reversed S hooks with two manganese bands below and a green above. On the neck there is a green chain with two horizontal manganese bands below and one above. Both sides of the spout and the handle are horizontally striped in alternate colours, and below the spout there are alternate curved lines.

Maiolica arcaica with oak leaf decoration has usually been dated later than similar forms with other varieties of foliage because of its use on 'famiglia verde' and 'zaffera' wares of the first half of the fifteenth century. Moore Valeri, however, has drawn attention to its occurrence on fragments of maiolica arcaica of forms dated to the late thirteenth and fourteenth centuries.

This form typically has a globular or biconical body with a restriction, a fairly narrow neck, and an applied `pelican beak' spout. The restriction may be concave instead of vertical, and the base of pronounced disk form instead of slightly accentuated as here. It seems likely that jugs with restrictions developed later than the same forms without them, and that spouts became progressively more pronounced in the late 13th and early 14th century. A drawing of a jug showing these features, but differing from this example in standing on a high foot, is shown on a page of the Statuti della Colletta (communal tax statutes) of Orvieto in 1334.