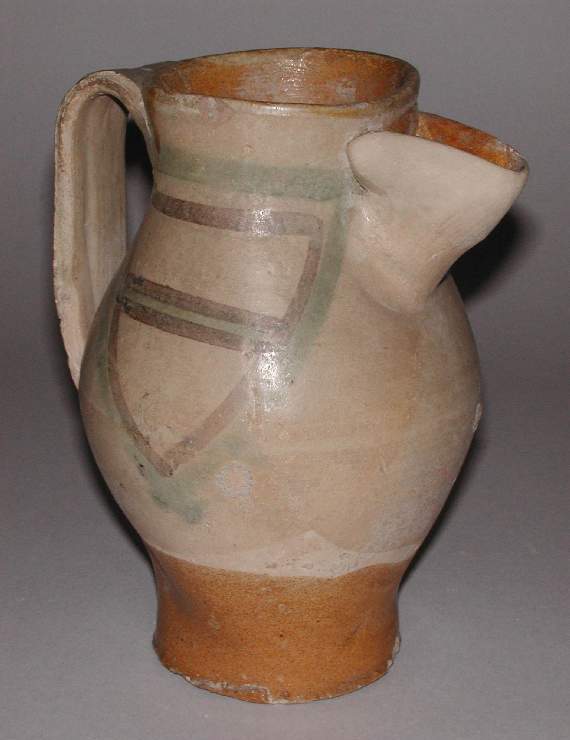 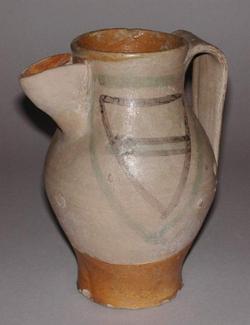 Late Medieval, maiolica jug, painted in black and green with a shield on each side.

Buff earthenware; the interior and the lower part of the exterior lead-glazed yellowish-brown; the rest thinly tin-glazed ivory. Painted in black and copper-green.
Shape 7. Ovoid with flat base, short cylindrical neck, applied folded spout and broad strap handle.
On each side within a green border, is a black-outlined shield charged with a fess vert.

Coats-of-arms occur less frequently on Orvieto maiolica than plant and geometrical ornament, but are nevertheless common on both jugs and bowls. The number of noble families in Orvietan territory was relatively small; forty-eight were recorded in 1322 of whom about twenty-seven were probably resident in the city itself. Pottery might also have been decorated with the arms of the podestà or capitano del popolo who was appointed from outside Orvieto. With some exceptions, the identification of the arms is problematic, because only two colours were used, and potters may not have shown the arms correctly. Their inaccuracy was probably the reason for the decree in 1378 prohibiting Orvieto potters from decorating vessels with arms, except at the wish of their possessor.

It is impossible to be sure because of the restricted colouring, but the arms on the jug may be those of the Baglioni family, azure a fess or (blue with a gold horizontal band)