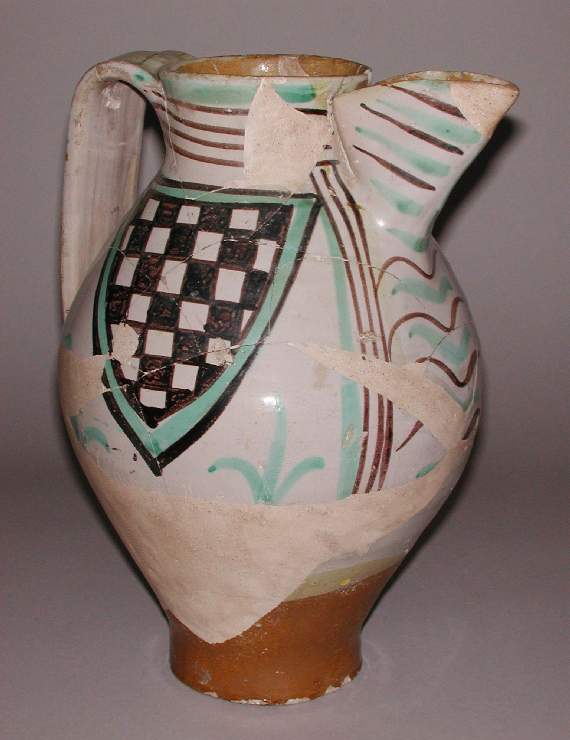 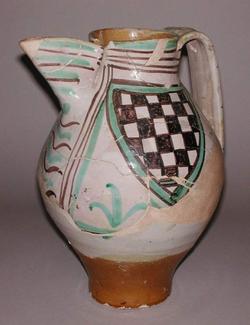 Late Medieval maiolica jug, painted in manganese and green with a shield on each side.

Pale buff earthenware; the lower part and interior lead-glazed yellowish-brown; the rest tin-glazed greyish-white. Painted in manganese and copper-green.
Shape 7. Bulbous ovoid with flat base, short cylindrical neck, applied folded spout and broad strap handle.
The spout and handle are flanked by three vertical manganese lines and a green line forming side panels, each containing a shield charged with the arms checky argent and sable (?) and below to the right and left, two green simplified fleurs-de-lis. On the neck, there are four manganese horizontal lines and one green; on the spout and handle, horizontal stripes of alternate colours, and under the spout, alternating wavy lines.

Provided that manganese was intended for sable (black) rather than gules (red), the arms correspond roughly to those of Giovanni Guido Pepoli of Bologna, capitano del popolo of Orvieto in 1276, but the quality of the glaze suggests that it was made at a later date. A jug of different form but decorated with similar arms is in the Museo Internazionale delle Ceramiche, Faenza