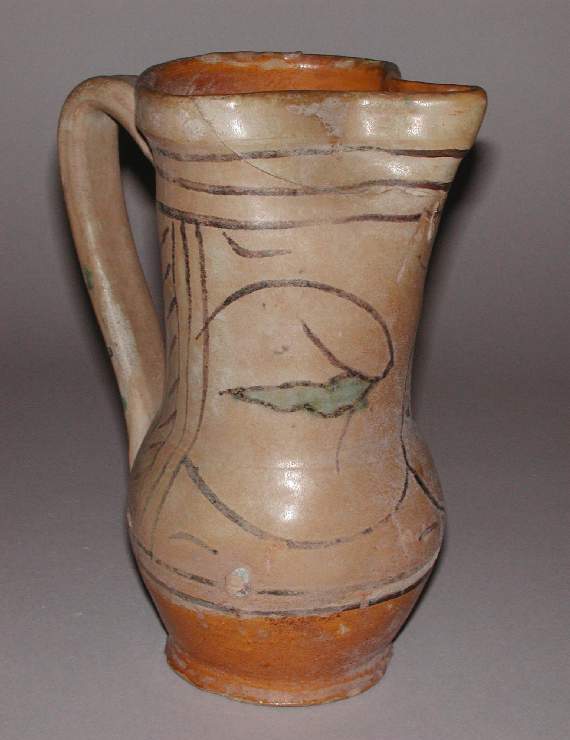 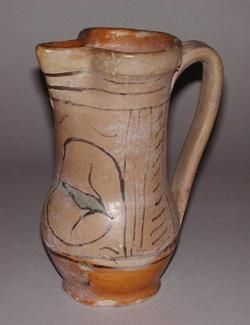 Late Medieval maiolica jug, painted in manganese and green with leaves on the front, oblique strokes and lines on the sides.

Pale buff earthenware fabric, the interior and lower part lead-glazed yellowish-brown; the rest tin-glazed, greyish-beige. Painted in dark manganese and a little copper-green.
Shape 11. Small bulbous body with tall cylindrical neck, carinated rim, pinched spout and loop handle of oval section.
The front is decorated with two green pointed leaves on coiling stems. On each side of the handle, in manganese, there are oblique strokes between two sets of three vertical lines. Below are two horizontal manganese bands; on the neck, three; and on the handle, four oblique stripes of alternate colours.

With Shape 7 (see Documentation, 1995) this appears to be the earliest tin-glazed jug form made at Oriveto. It varies in size, and in the proportions of neck and body, and also occurs with a restriction round the bulbous part. Plant and geometrical ndecoration occur most frequently this type, heraldic decoration less often, and zoomorphic designs rarely. Front panels decorated with leaves on scrolling stems also occur on jugs C.37-1991, C.39-1991, C.38-1991, C.41-1991, and C.45-1991.