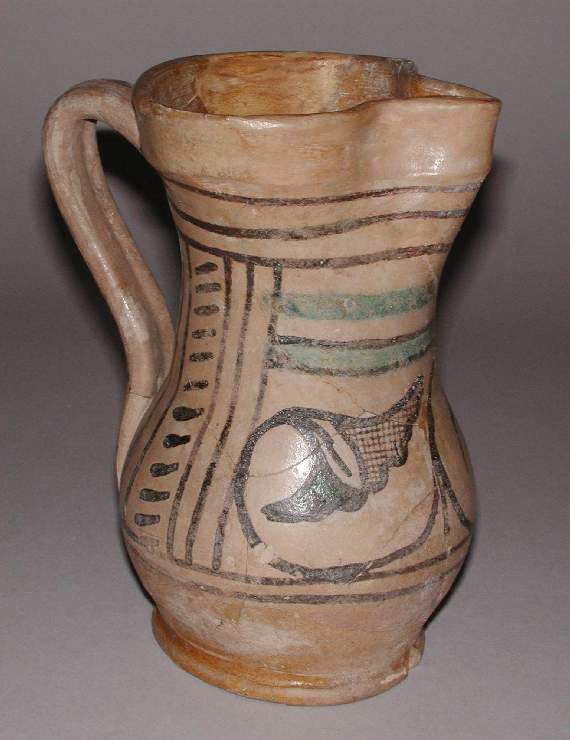 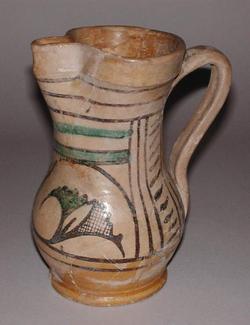 Pale buff earthenware, the interior, lower part and most of the base lead-glazed yellowish-brown; the rest tin-glazed greyish-white. Painted in black and a little copper-green. Shape 11. Bulbous body with disk base, tall cylindrical neck, carinated rim, pinched at the front to form a spout, and loop handle of D section.
The front is decorated with two partly hatched and partly green leaves on a scrolling stem with above, a green horizontal line between two manganese, and another green. On each side of the handle, in manganese, there are oblique strokes between two sets of three vertical lines. Below and round the neck, there are three horizontal manganese bands; on the handle, five horizontal stripes of alternate colours.

Interior, Lower Part composed of lead-glaze ( and most of base) Decoration composed of high-temperature colours ( black and copper-green) Exterior composed of tin-glaze Body Diameter 10.7 cm
Base Diameter 8.5 cm
Handle To Spout Width 13.4 cm