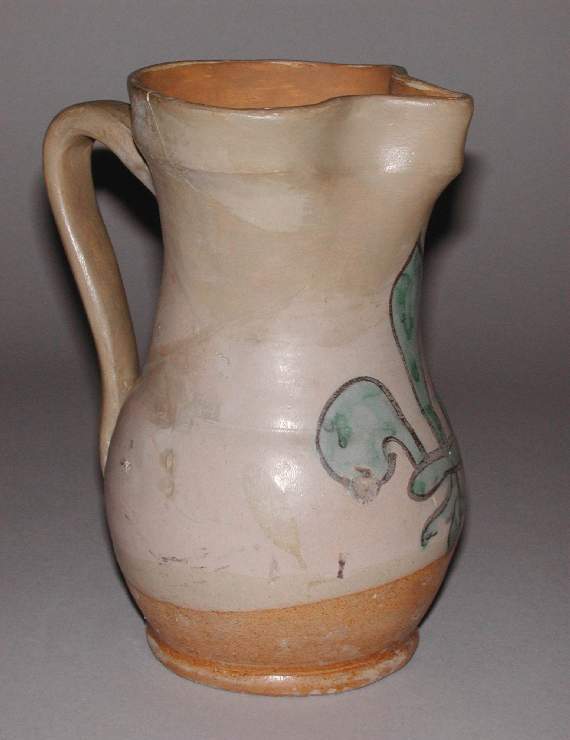 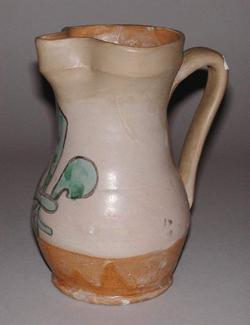 Late Medieval maiolica jug, painted in black and green, with on the front a fleur-de-lis.

Earthenware. The interior, lower part, and base are lead-glazed brown; the rest is tin-glazed greyish-beige. Painted in black and copper-green.
Shape 11. Bulbous body with disk base, cylindrical neck, carinated rim, pinched spout and loop handle of D-section.
On the front there is a green fleur-de-lis outlined in black.

The fleur-de-lis occurs on medieval maiolica as a heraldic device on shields, or as an independent decorative motif. It was associated with the house of Anjou whose arms were azure semé-de-lis or differenced by a label of five points gules, and it would therefore have been an acceptable decorative motif on pottery used by Orvieto's Guelphs led by the Monaldeschi. However, its frequent use on Orvieto pottery during the late thirteenth, and fourteenth, century more probably reflects the fact that it was a charge on the shield of the Farnese (who were closely associated with Orvieto from the early twelfth century), and on those of the Montemarte, Marsciano, and Dolci families of Orvieto. When the complete arms are not shown, the fleur-de-lis is usually single so it is not possible to associate it with a specific family. The motif also occurs on maiolica from Lazio.