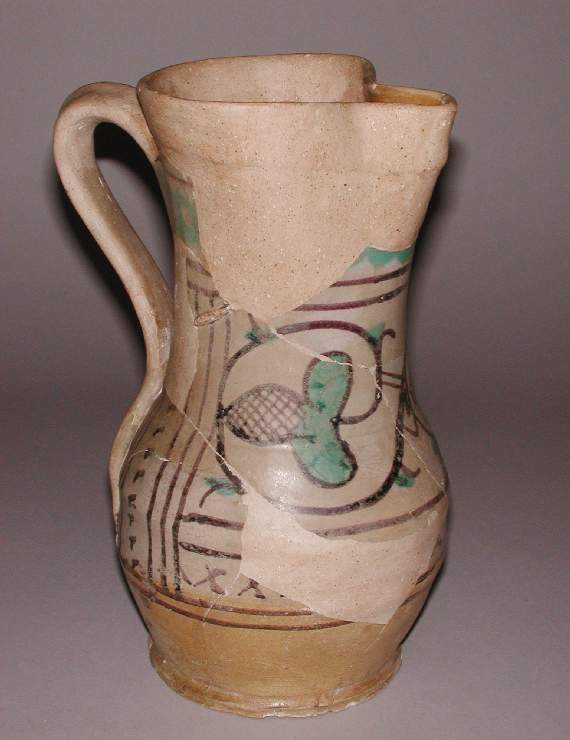 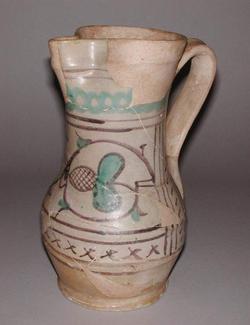 Late Medieval maiolica jug, painted in manganese and green with leaves at the front, surrounded by vertical and horizontal bands.

Pale buff earthenware. The interior and lower part are lead-glazed pale yellowish-brown; the rest is tin-glazed pale grey. Painted in manganese and green.
Shape 12. Bulbous body with disk base and slight restriction, cylindrical neck, carinated rim, pinched spout and strap handle with a longtitudinal ridge.
The front is decorated with two partly hatched and partly green trefoil leaves on coiling stems, below which is a row of crosses between two pairs of manganese horizontal bands. On each side of the handle, there are oblique strokes between two sets of three vertical manganese lines. The neck is encircled by a green chain between pairs of horizontal manganese bands.

History note: Purportedly excavated at Orvieto. Purchased from Kerin, London, on 9 December 1933 by H.S. Reitlinger (d.1950); the Reitlinger Trust, Maidenhead, from which transferred in 1991.