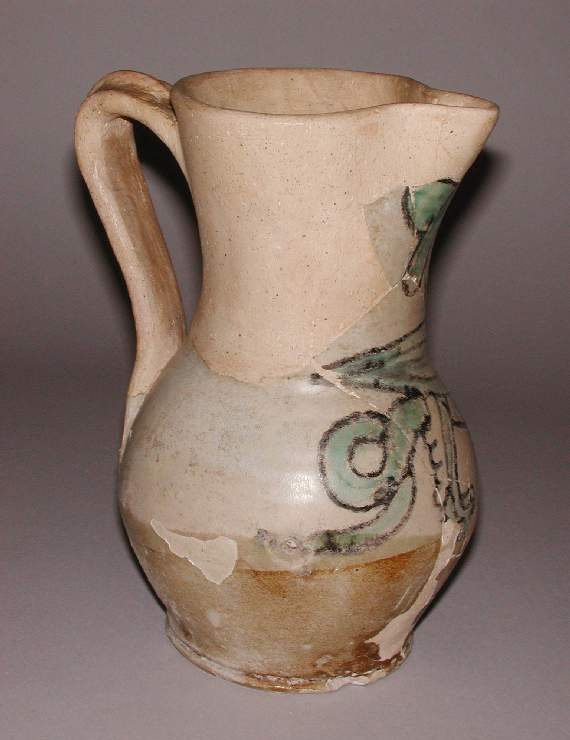 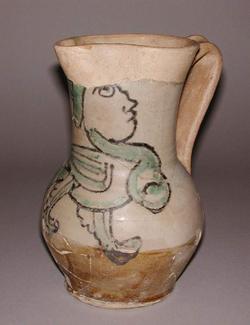 Late Medieval maiolica jug, painted in black and green with a monster on the front.

Pale yellowish-buff earthenware. The interior, lower part and most of the base are lead-glazed yellowish-brown; the rest is tin-glazed greyish-beige. Painted in black and copper-green.
Lower part approximately Shape 11. Bulbous body with disk base and tall cylindrical neck, pinched spout and strap handle with longtitudinal ridge; the handle, spout and rim are restored.
The front is decorated with a monster with the head of a man wearing a cap, the body of a bird, a curly tail and lion's feet.

Harpies and other mythical creatures with human heads about in gothic sculptural ornament, illuminated manuscripts and applied art. They occur frequently on late medieval pottery from Orvieto and elsewhere in central Italy.

Interior, Lower Part composed of lead-glaze ( and most of the base)
Decoration composed of high-temperature colours ( black and copper-green)
Exterior composed of tin-glaze
Body Diameter 13.3 cm
Base Diameter 9.6 cm