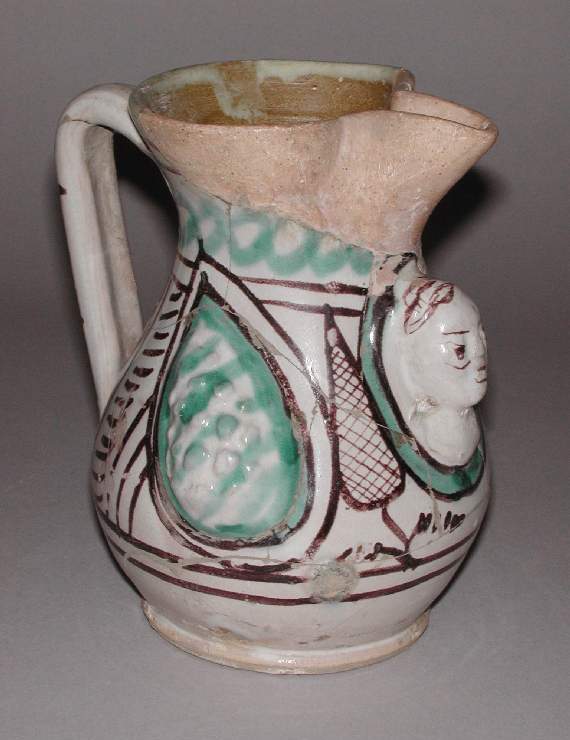 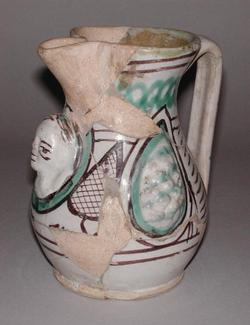 Late Medieval maiolica jug, painted in manganese and green with a relief head and pine-cones.

Pale cream earthenware. The interior is lead-glazed brownish-yellow, the exterior is tin-glazed greyish-white, and the lower edge and base are unglazed. Painted in manganese and copper-green. Shape 19 (Poole, 1995). Squat piriform body with disk base, short neck, trilobate mouth and loop handle of D section.
The front is decorated with a relief head flanked by cross-hatched leaves and relief pine-cones. On each side of the handle there are oblique strokes between two sets of three vertical lines. Below are two horizontal manganese bands; on the neck, a green chain between pairs of manganese bands; and on the handle, seven horizontal stripes of alternate colours.

History note: Signor Avvocato Arcangelo Marcioni (1859-1928)or Cavaliere Capitano Ferdinando Lucatelli (1862- ) whose collections were sold without differentiation by Sotheby's, 16-17 February 1914, Catalogue of the collections of early Italian pottery formed by Signor Avvocato Marcioni and Cavaliere Capitano Lucatelli of Orvieto, lot 79C (1). Purchased from Kerin, London, on 9 December 1933 by H.S. Reitlinger (d. 1950); the Reitlinger Trust, Maidenhead, from which transferred in 1991.