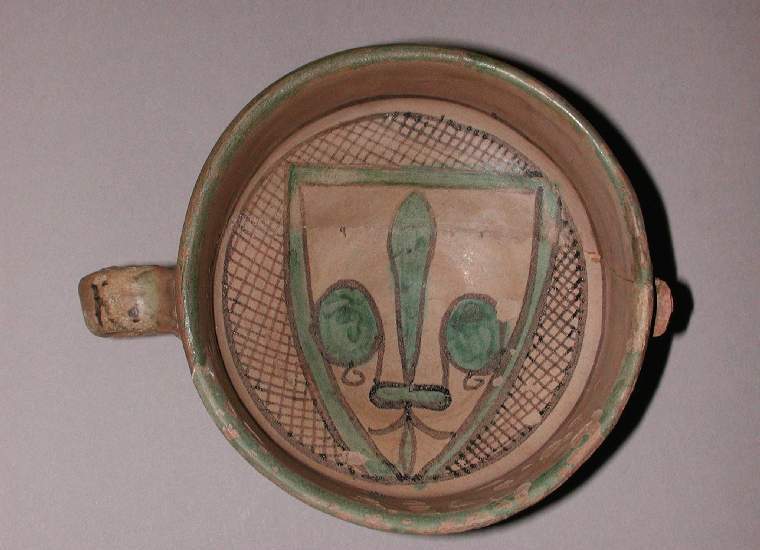 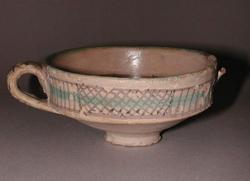 Late Medieval maiolica cup with one handle, painted in black and green with, on the inside, a shield.

Pale reddish-buff earthenware, tin-glazed beige on both sides; base unglazed. Painted in black and copper-green.
Approximately Shape 21. Circular with carinated sides, narrow foot and one loop handle; the other has been broken off.
Inside, within two black concentric circles, there is a shield with a green border, charged with a green fleur-de-lis, surrounded by cross-hatching. On the outside there are two panels of cross-hatching each flanked by panels of vertical lines, over a green band; on the rim, a green band, and, on the handle, a green horizontal stroke with three black strokes above and below.

Fleur-de-lis occur frequently on late medieval maiolica, either as independent motifs (see jug C.50-1991), sometimes surrounded by a contour panel, as on a two-handled cup in the Detroit Institute of Arts, or as charges on shields, as on a cup of this type formerly in the Imbert collection, a two-handled bowl in the Casina del Bessarione, Rome, and a lobed bowl in the Museo dell'Opera del Duomo, Orvieto. The motif also occurs on maiolica from Lazio.