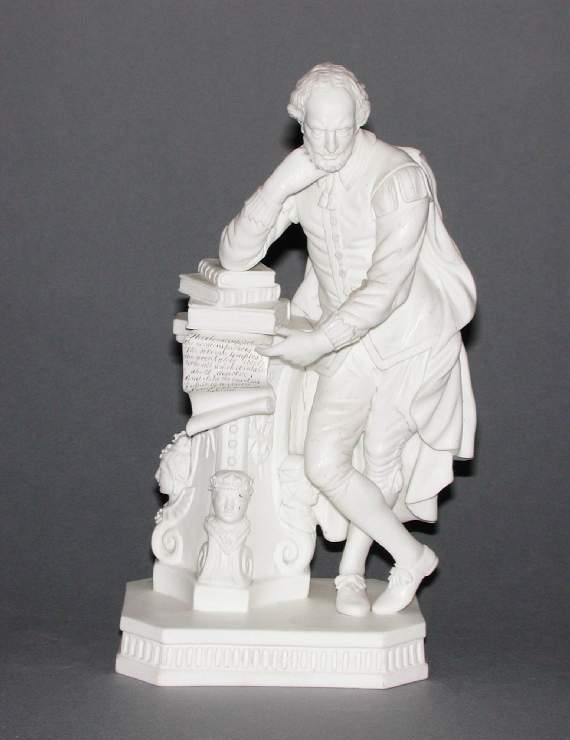 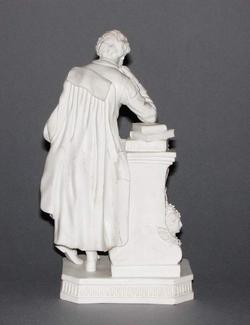 Biscuit porcelain figure of William Shakespeare, slip-cast with applied details. The underside has a bevelled circular ventilation hole in the centre. The shallow rectangular base has cut corners, and vertically ribbed sides. The poet stands on the viewer's right with his right leg crossed over his left, leaning on his right elbow on a pile of three books resting on top of a three-sided pedestal. He is bearded, and wears a close-fitting buttoned jacket, breeches, a cloak and shoes with ties on top. The pedestal is decorated on the angles with heads of Henry V, Richard III, and Queen Elizabeth with volutes below. Hanging down from below the pile of books is a scroll inscribed in black with a quotation from one of Prospero's speeches from the Tempest, Act IV, Scene I:
"The cloud capped towers
the gorgeous palaces.
The solemn temples
the great globe itself
yea all which it inherits
Shall dissolve;
and like the baseless
fabric of a vision
Leave not a wrack
behind"

Shakespeare was produced in three versions at Derby: in the late 1750s in enamelled porcelain on a low scrolled base; and later in enamelled porcelain on a rectangular base with vertical ribbing. It was also produced in biscuit porcelain from about 1770-1. The model was derived from the monument in Westminster Abbey, designed by William Kent (1685-1748) and executed in marble by Peter Scheemakers (1681-1761) in 1740. Its direct source was probably a reduced-size plaster. such as one of those stocked by John Cheere in London. It was often sold as a pair with Milton, see C.108-1932.

Inscription present: N 305 is above the ventilation hole and small below and to the right of it 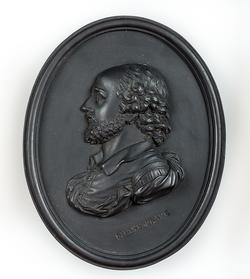 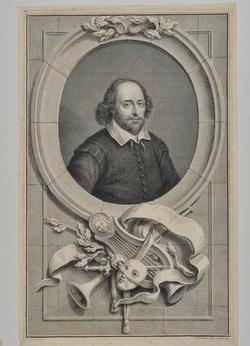 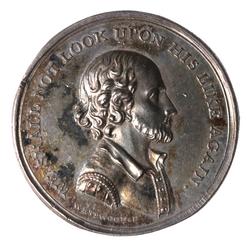