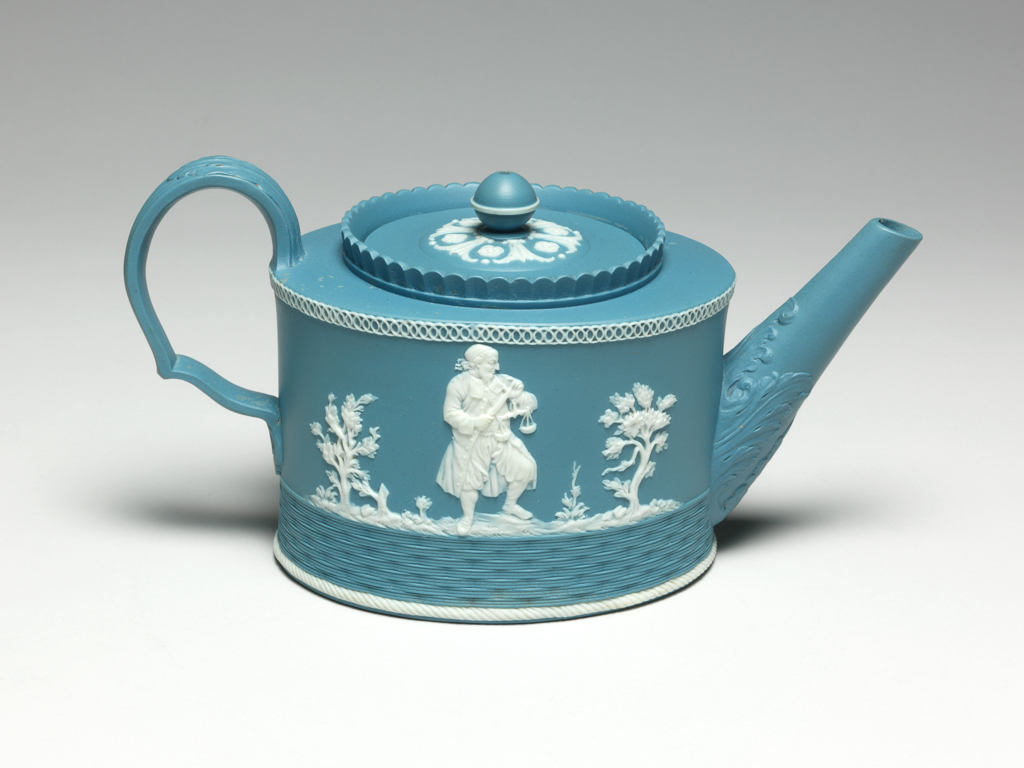 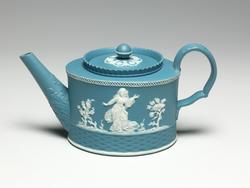 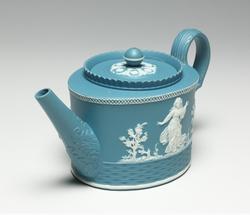 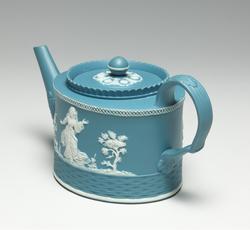 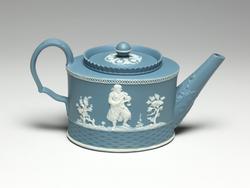 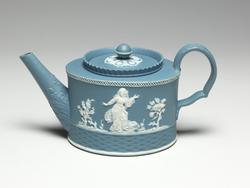 Pale blue jasper teapot decorated with engine-turning and with moulded and applied white jasper reliefs. Oval with straight sides, flat shoulder with a circular scalloped gallery surrounding the almost flat cover which has a pierced ball knob; straight sloping spout moulded in two halves and having sixteen holes forming a lozenge behind it in the wall of the pot; ear-shaped handle with a cusp on the lower side. The lower edge is decorated with a white 'rope' over which there is a zone of engine-turned basket weave. Above on one side there is a white relief of Elizabeth Inchbald as Lady Abbess in the 'Comedy of Errors', flanked by two plants and two small trees, and on the other side a white relief of Charles Macklin as Shylock in the 'Merchant of Venice', flanked by two plants and two small trees. The top edge is decorated with pierced white overlapping circles. The cover has a central knob with white horizontal white band, surrounded by alternating four-petalled flowers and addorsed leaves. The lower part of the spout is moulded in relief with acanthus and the handle is reeded and has an acanthus leaf at the top and a smaller one at its base. The underside is flat, with a slight, wide foot-rim.

James Neale, a London pottery and glass merchant, took over Church Works, Hanley in 1778, including the stoneware business set up by Humphrey Palmer c.1759. Robert Wilson ran the practical side of the business, which continued under various names, including James Neale & Co. and Neale & Wilson until1792. It continued under Robert Wilson and his son David until 1818. The Hanley site produced fine white stonewares and, from the early 1780s, a limited range of jasper tea and ornamental wares, mainly in shades of blue.

Jasper, an unglazed fine stoneware with an impervious surface sheen, was introduced by Wedgwood in the mid 1770s. Other factories, including Neale, soon produced their own versions. Jasper was made in white or solid colour, often blue, and later by dipping in coloured slip. The coloured body was then decorated with sprigs - designs formed in small plaster, clay or brass moulds – applied when the clay was leather hard.

The sprigs of theatrical characters on the sides of the teapot were modelled after prints dated 1785 of 'Mrs Inchbald in the Character of Lady Abbess' in Shakespeare's 'Comedy of Errors' and of 'Mr Macklin in Shylock' in the 'Merchant of Venice', after J.H. Ramberg, which appeared in John Bell's 'The Dramatick Writings of Will. Shakspere: With the Notes of all the various Commentators complete from the best editions of Sam. Johnson and Geo. Steevens', Printed for and under the direction of, John Bell, British Library, Stand, 20 vols., London, 1785 or a later edition. See Documentation, Carde and Pendergast, 2004. 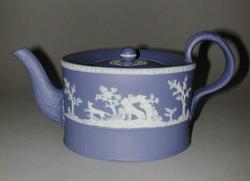 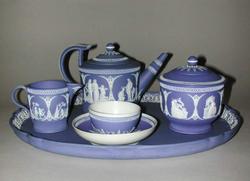 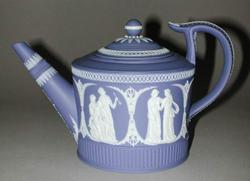 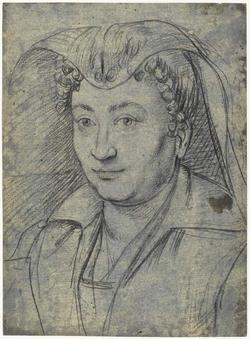