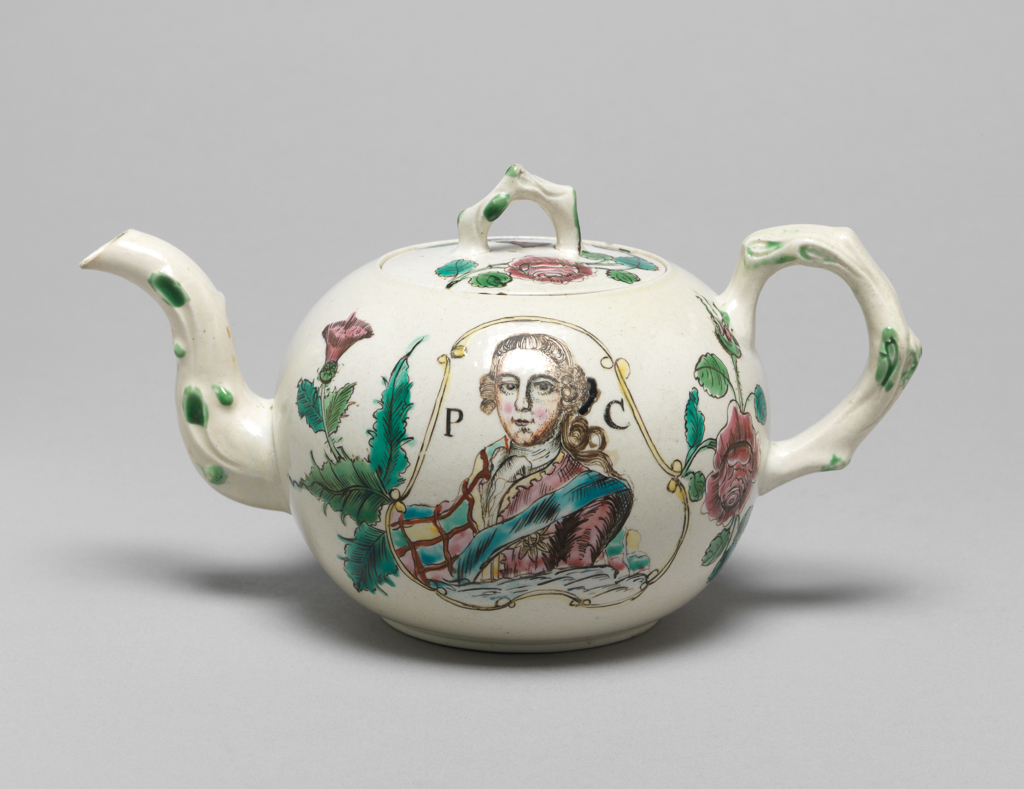 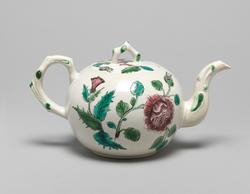 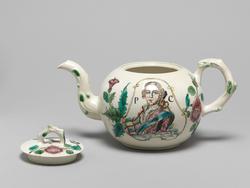 White salt-glazed stoneware painted in turquoise, green, pale yellow, shades of dark pink, and black enamels. The pot has a globular body with applied crabstock handle and spout, and a circular cover with crabstock handle, with a pierced ventilation hole below it. There are five holes pierced in the wall of the pot behind the spout to emit the tea. One side is painted with a bust portrait of Prince Charles Edward Stuart, the Young Pretender, flanked by the initials P C, and enclosed by a wavy three sided yellow stem from which branches a thistle spray on the left and a rose spray on the right. On the other side there is a thistle spray and a rose spray, and on the cover a curving rose spray and a smaller thistle spray. The handles and sprout are dabbed with green here and there.

This teapot commemorates Prince Charles Edward Stuart (1720-88), grandson of the deposed James II of England and VII of Scotland, a Roman Catholic who had ruled from 1685-88. Prince Charles was brought up as a Roman Catholic by his father Prince James Edward Francis Stuart (1688-1766) who lived in Rome, and was known as the 'Old Pretender' (claimant). In 1745 with French assistance, Prince Charles travelled to Scotland to lead a rebellion against the Hanoverian and Protestant George II. Initially successful, the rebels were defeated at the Battle of Culloden in April 1746, and 'Bonnie Prince Charlie' fled to France where he stayed until 1748. He made a brief incognito visit to London in 1750, but failed to get support for a further rebellion. After his father's death, he continued to claim the thrones of Scotland and England. He spent the latter part of his life in Rome, where he died. The Pretender's supporters were known as Jacobites (from Jacobus, Latin for James). During the 1750s and 1760s a considerable amount of English glass and ceramics were decorated with portraits of the Prince, and/or Jacobite emblems such as roses, and thistles, but this does not seem to have reflected a widespread desire to restore the Stuart line. In his youth the Prince was a handsome, brave and romantic figure, as shown by his portrait by Alan Ramsay, painted iEdinburgh in 1745, but as he aged it became clear that he would not make a satisfactory monarch, and support for the Stuart cause dwindled.