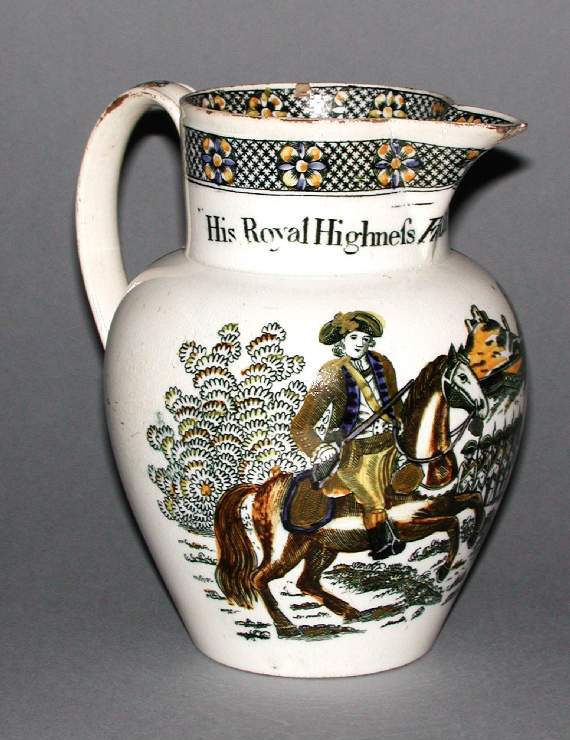 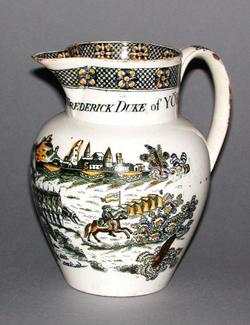 Pearlware, transfer-printed and painted in enamels with Frederick, Duke of York on horseback and a military camp, inscribed round the neck 'His Royal Highness FREDERICK DUKE of YORK'

White earthenware, thrown, with applied handle, lead-glazed very slightly blue, transfer-printed in black, and painted in blue, green, yellow, brown and black enamels. The jug has an ovoid body, a cylindrical neck with pointed lip, and an applied strap handle with a leaf terminals. The body is decorated with Frederick, Duke of York, holding a sword, mounted on a horse galloping to the viewer's right. Behind him there is a large bush. Further to the right there is a row of six soldiers, a canon, a mounted officer galloping to the right, a row of tents, one of which is flying a flag, and in the foreground, a tree. In the background there is a ruin on a hill, a fortified town, and some trees. The lower part of the neck is printed in black with 'His Royal Highness FREDERICK DUKE of YORK'. The upper part of the neck has a broad border of alternating blue and yellow flower heads and panels of black trellis pattern, which is repeated inside the rim, and down the upper part of the back of the handle.

A bowl decorated with a similar printg has been attributed possibly to Swansea.