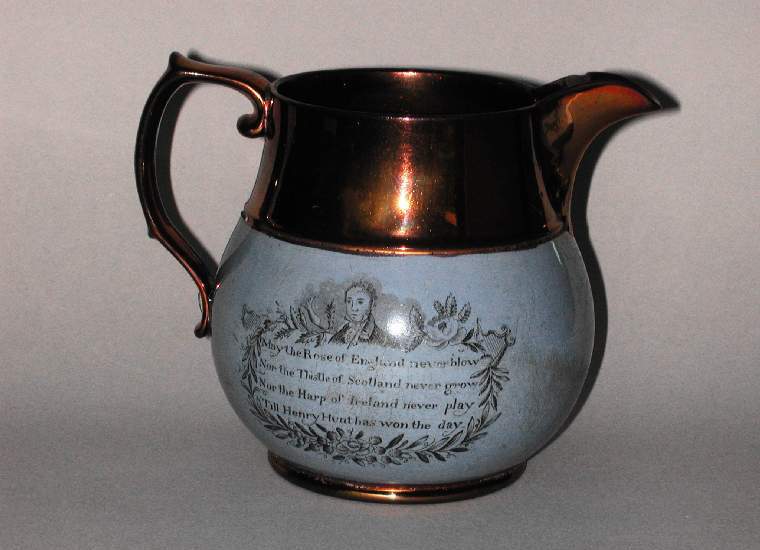 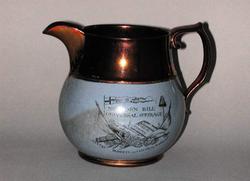 Jug with bulbous body, slightly concave, narrowing neck and loop handle with thumb piece. The body decorated on either side with transfers, printed in black on a blue slip ground. The neck, rim, handle, foot-rim and underside are coated with copper lustre. The interior, below the copper lustre neck, is coated in white slip.

The images and text are as follows:
(a) a bust portrait of Henry Hunt with, below, in a framework of national floral emblems:
‘May the Rose of England never blow,
Nor the Thistle of Scotland never grow,
Nor the Harp odf Ireland never play
Till Henry Hunt has won the day’.

(b) flags, weapons, and a Cap of Liberty arranged around the inscription
‘NO CORN BILL / UNIVERSAL SUFFRAGE’ and scrolls titled ‘HABEAS CORPUS’ and ‘Bill of Rights’. Below all these, the inscription ‘ANNUAL PARLIAMENTS and VOTE by BALLOT’.

Henry Hunt (1773-1835) was a Wiltshire farmer and radical speaker who called, inter alia, for electoral reform and repeal of the Corn Laws and supported radicals such as William Cobbett and Sir Francis Burdett. Hunt became known for his rousing speeches, notably at Spa Fields in London in 1816-17 and at the rally which turned into the Peterloo Massacre at Manchester in April 1819 (and which led to his imprisonment). During a brief time as an MP, 1830-1833, he continued to fight for universal suffrage and introduced the first petition for votes for women. The Corn Laws, however, which imposed import controls and tariffs to protect domestic grain producers and caused significant rises in the price of bread and other everyday staples, remained in force 1815-46. The ‘No Corn Bill’ transfer on this jug has also been found on other, differently shaped, examples, sometimes with the inscription ‘Hunt for Ever’ in the pennant and sometimes paired with a transfer relating to Peterloo. The ‘May the Rose of England never blow…’ verse appears throughout the 19th Century, though with the second line ‘…the Clyde of Scotland cease to flow’ and with variations to the final line; thus, eg, an 1840 version reads: ‘…until the Chartists win the day’. English lustreware was commercially produced from c.1805 and popular throughout the first half of the 19th Century. Staffordshire potters were the first and largest producers, though similar wares were also made in other regions and pink lustreware is often particularly associated with Sunderland. Minute amounts of gold were used to produce copper, gold, pink or purple lustre, depending on the type of clay, lustre formula, number of layers and firing temperature; platinum was used to mimic silver. Most lustreware was made for everyday use, and factory markings are rare. The shape and moulding of this jug, combined with the use of blue slip and copper lustre, are similar to those of a sprigged jug by Wood & Caldwell, c.1810 (Gibson, 67). Enoch Wood and James Caldwell introduced monochrome transfer printing at the Fountain Place works in Burslem in the 1790s and in the following decade became significant producers of lustred earthenware. In 1818, Enoch Wood bought out his partner and continued to trade as Enoch Wood and Sons. 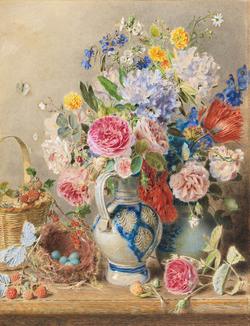 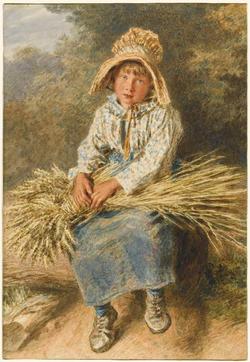 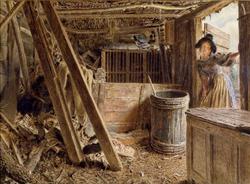 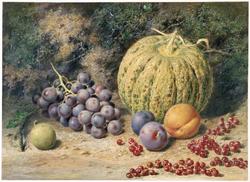