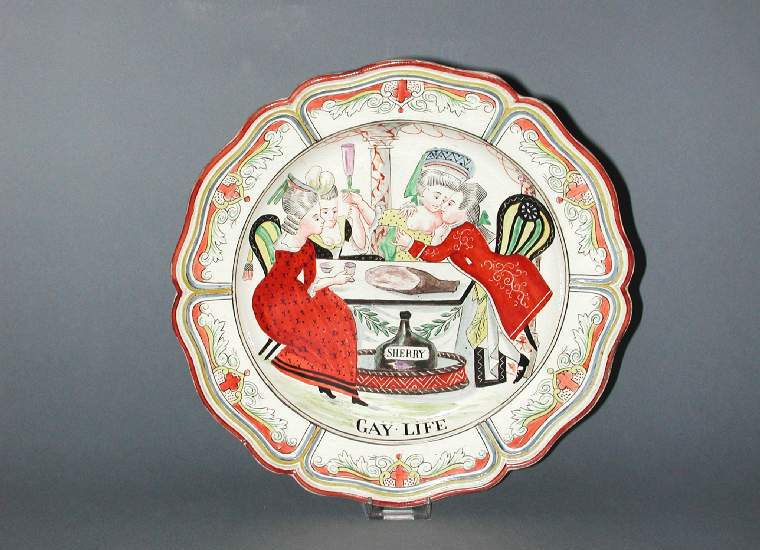 Pale cream-coloured earthenware covered in a clear lead-glaze and painted overglaze with coloured enamels. The plate has a six-lobed wavy rim with a double moulded line around the edge. Each lobe is painted with red, yellow and blue bands around the edge and yellow scrolls, green leaves and a red cross in the centre. On the right in the scene in the middle of the plate is the Prodigal Son leaning over a table to embrace a woman with bare breasts, who strokes his chin with one hand and holds a wine glass in the other. At the other end of the table sits another bare-breasted woman and a woman in a red dress with a wine glass. On the table is a large ham and in front of it is a bottle labelled ‘SHERRY’. In the background are arches and columns covered in wavy red lines to create a marble effect. Beneath the scene is the title: ‘GAΫ LIFE’. Marked on base with impressed lozenge.

This plate belongs to a set of six (C.1184-1928 - C.1184E-1928) which illustrates the parable of the Prodigal Son. The scenes on the plates are derived from Richard Purcell’s prints, published in London in that early 1750s, after a series of paintings of the Prodigal Son by the French artist Sebastien le Clerc. This scene on this plate is from the middle of the parable: it shows the Prodigal Son squandering his wealth on worldly pleasures. 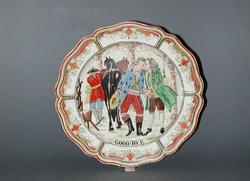 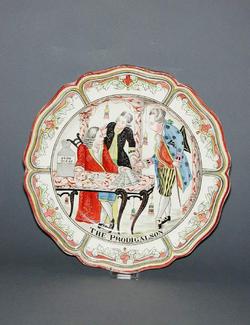