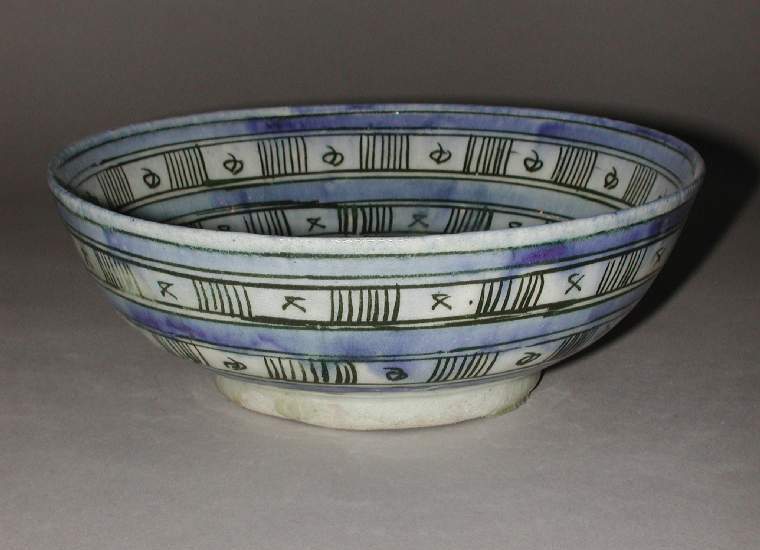 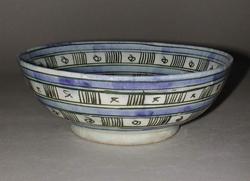 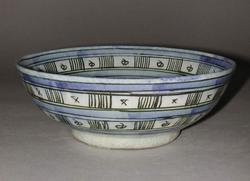 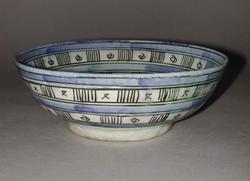 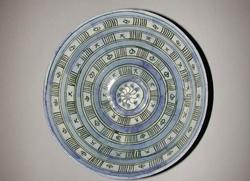 Fritware, painted in black and blue under a clear glaze

Fritware, wheel thrown, painted in black and blue under a clear glaze.
Shape: hemispherical bowl with a plain rim, on a low foot ring. Raised dimple on the interior base.
Interior: a black concentric line is painted just below the rim. On the body, four concentric friezes painted in black against a white ground, these friezes are separated by bands of blue pigment. The friezes contain either ovals, with a line crossed through, or diagonal crosses painted in a single stroke resulting in joining of the upper arms; both these shapes are separated by rows of vertical lines. On the base a swirling rosette outlined in black and coloured in blue is painted against a white ground.
Exterior: similar decoration to that on the interior with a single black line just below the rim and two concentric friezes on the body separated by bands of blue. Glaze covers the foot ring unevenly and is also present on the underside of the base.

Given by Julius Spier Esq.

Method of acquisition: Given (1912) by Spier, Julius

Throwing : Fritware, wheel thrown, painted in black and blue under a clear glaze