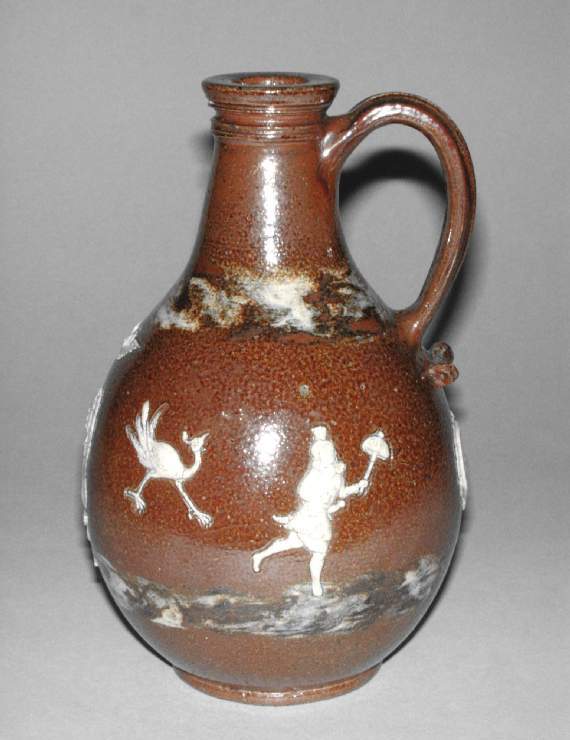 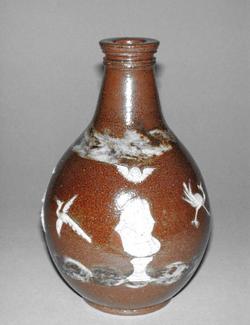 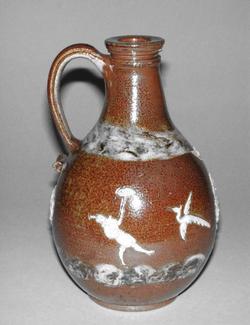 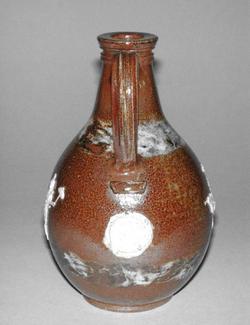 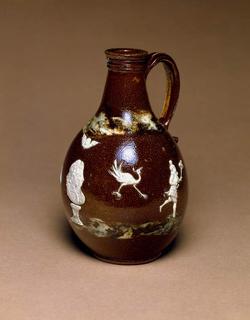 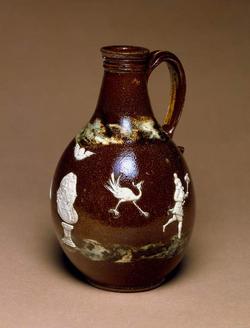 Salt-glazed stoneware with marbled bands, thrown and turned, and decorated with applied ‘sprigs’. The sprigs, made with brass stamps, include overlapping busts of William III and Mary II (d. 1694), a flying bird, winged cherub’s head, two Merry Andrews (clowns), and an initial C amid foliage.

During the sixteenth and seventeenth centuries hundreds of thousands of sturdy salt-glazed stoneware bottles were imported from the Rhineland to serve as containers for wine and other liquids, such as perfumed waters. Several attempts were made to produce them here, for example, at Woolwich about 1669, but these ventures were short lived. The first person to master the technique of salt-glazing and continue successfully for a long period was John Dwight (c. 1633/6-1703). During the late 1660s Dwight, a lawyer by profession, was Registrar of the diocese of Chester and conducted experiments to produce stoneware at Wigan. In 1671/2 he moved to Fulham and in April 1672 was granted a patent for making 'China and Persian ware' and also 'the Stone Ware vulgarly called Collogne Ware'. In 1684 a renewal of the patent included various other types, among them 'marbled Porcellane Vessels' but there is not evidence that the experimental porcelain made by Dwight in the 1670s was produced commercially. The sprigs on this bottle were made with brass stamps, some of which were found at the Fulham pottery in the 1860s and were later acquired by the British Museum. The initials AR on one of them probably stand for the medallist, Reinier or Regnier Arondeau (c.1655-1727). The bottle remained in the possession of Dwight's descendants until 1861-2, and in 1871 was sold at auction with other heirlooms which included two similar bottles, now in the British Museum and the Victoria and Albert Museum. The sprig of William III and Mary II indicates that the bottle was probably made before Mary''s death in 1694. 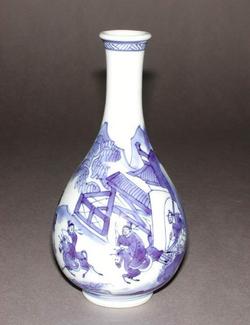 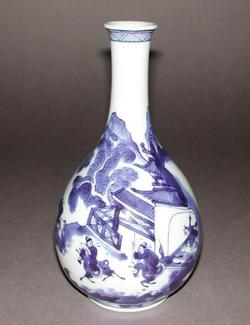 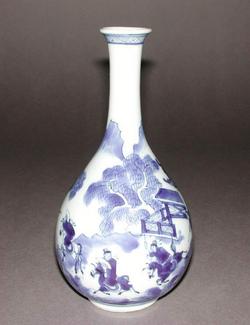 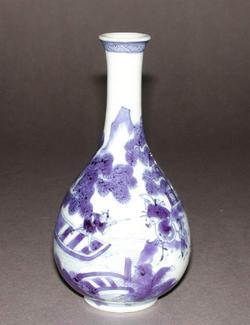