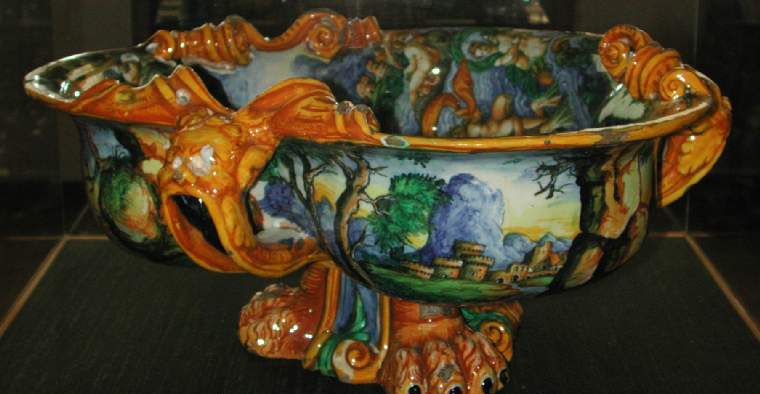 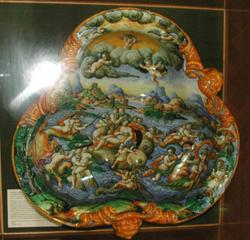 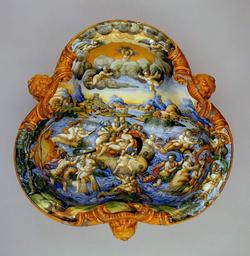 Maiolica trilobate cistern, painted in polychrome with, on the interior the Triumph of Amphitrite or Galatea, on the exterior landscapes.

Buff earthenware, tin-glazed creamy-white overall. Painted in blue, green, yellow, orange, stone, brown, manganese-purple, black, grey, and white.
Trilobate bowl, standing on a base composed of three lion's feet with vertical scrolls between them. Between each of the lobes there is a deeply grooved handle, terminating at the top in a grotesque mask with a gaping mouth and curling horns which rest on the rim.
The interior is decorated with the Triumph of Amphitrite or Galatea. The goddess reclines in a cockle-shell chariot drawn by two dolphins, surrounded by tritons and sea nymphs, a sea horse, and putti frolicking among the waves. In the background there are buildings close to the shore with mountains beyond. Above, five putti holding foliage play amid clouds. The rim is yellow and orange. On the outside, each lobe is decorated with rocks and buildings in a landscape. The lion's feet base, scrolls and mask-handles are coloured yellow and orange.

Purchased with the Cecil C. Mason Fund and grant-in-aid from the Victoria and Albert Museum.

Probably made in the workshop of Guido Durantino (Fontana) and his son Orazio, or if made between 1565-70 possibly in Orazio Fontana's workshop 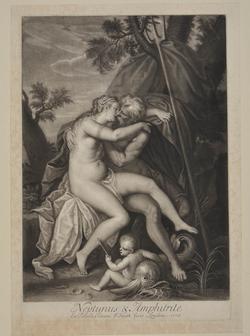 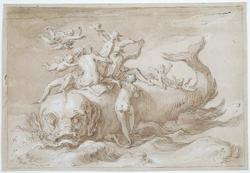