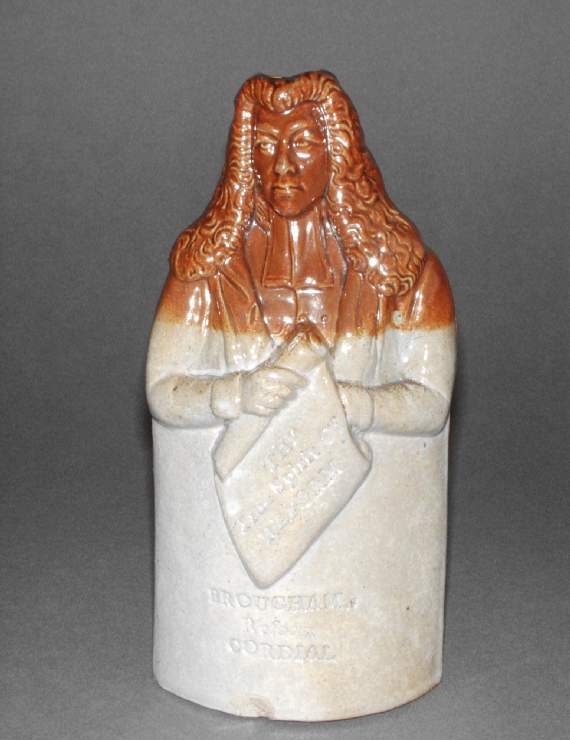 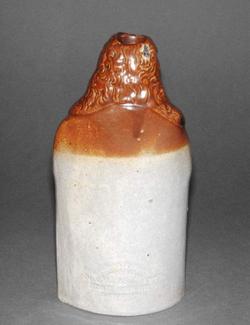 Grey stoneware flask with a round opening at the top, which previously held a cork. The upper part is moulded in the form of the head, shoulders and arms of Lord Brougham, in wig and bands, and partly dipped in dark brown slip. His hands hold a scroll on which is impressed ‘THE True Spirit of REFORM’. A further impression, below, reads ‘BROUGHAM’s Reform CORDIAL’. The back of the flask is stamped ‘Lambeth Pottery DOULTON & WATTS 15 High Street Lambeth’. The ellipse-shaped underside is flat and lightly glazed.

History note: Bought by Dr Glaisher, Trinity College, Cambridge, from Mr Addison ‘who generally attended to work in my room’, for 10/-(ten shillings), in 1908.

Doulton, founded c.1815 by John Doulton and trading as Doulton & Watts c.1820-1853, originally made utility ceramics, as well as stoneware jugs and ornamental bottles. Later, in the mid-1860s, Henry Doulton introduced decorative stoneware and architectural terracotta, producing both unique, artist-signed, and limited edition pieces. From 1872 the business expanded into faience and in the 1880s opened a factory at Burslem, Staffordshire, where bone china and other wares were made. In 1901, Edward VII granted the Royal warrant to the factory. Stoneware production at Lambeth reduced after 1914, and ceased in 1956

From 1820 to c.1856, Doulton and Watts produced thousands of commemorative ‘reform bottles’ depicting reformist politicians and royalty, employing 20 men to make them. The modellers may have been shared, as several other Lambeth potters made similar designs. The bottles were probably made to hold spirits, notably gin (available at one shilling (5p) per pint in the 1830s); ‘cordial’ then being a term for alcoholic drink.. Henry Brougham (1778-1868), as Lord Chancellor, led the House of Lords to pass the 1832 Reform Act, which extended voting rights to some two million of the urban middle classes and abolished rotten boroughs. He was one of the most popular reform bottle subjects, and nearly 20 variations are recorded, in sizes ranging from 5 ½ to 14 inches. 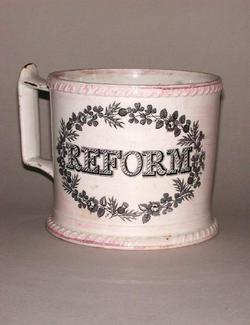 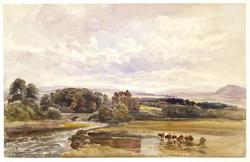 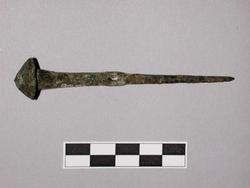 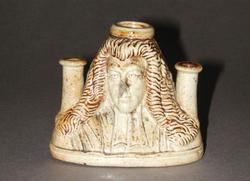 Inkstand in the shape of a Bust of Lord Brougham 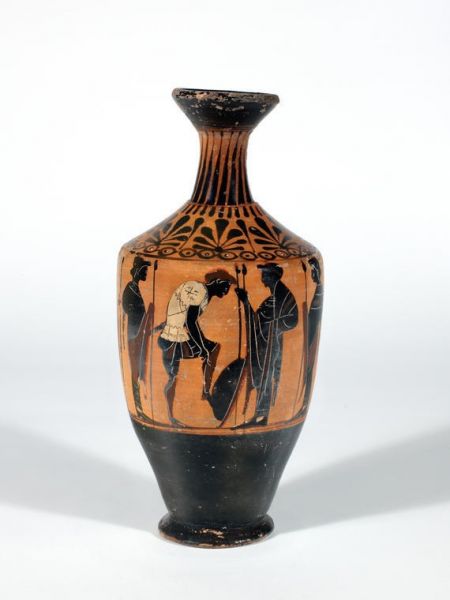