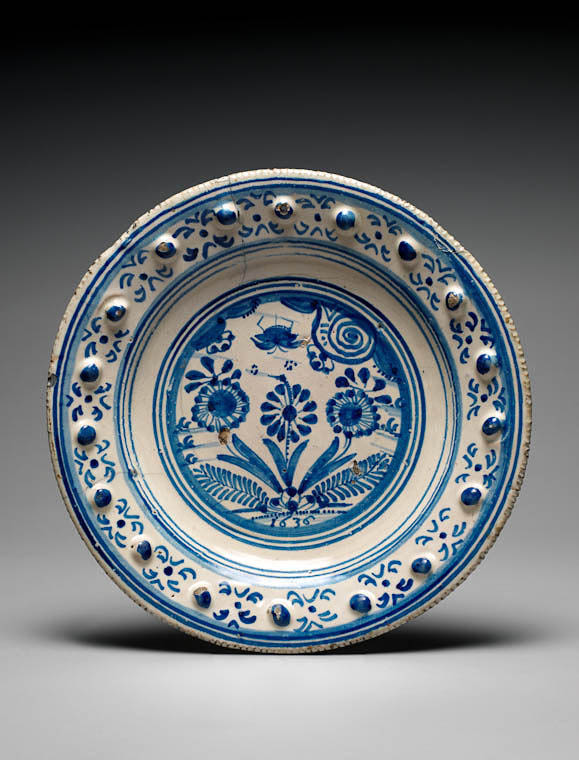 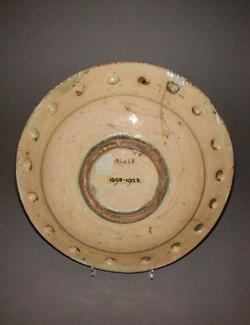 Tin-glazed earthenware dish with serrated edge, and bosses on the rim, painted in blue with flowers and a rock in imitation of late Ming blue and white porcelain

Reddish-buff earthenware, the front, tin-glazed and painted in blue; the back covered with clear lead-glaze. Circular with a serrated edge, sloping rim with eighteen bosses pushed up from the back, and shallow curved well, standing on a footring. In the middle within two narrow concentric circles is a plant with three flowers, with an insect and a snail overhead in late Ming style. The upper edge of the well is encircled by three concentric circles, and there are two by the outer edge. The rim is decorated between the bosses with dots and groups of curved strokes representing foliage.

Fragments of dishes with rim bosses have been found at Pickleherring and at Rotherhithe, but it is not certain that the latter was operating by 1636.

Probably made in Southwark at either the Pickleherring or Rotherhithe potteries. The design in the middle was derived from late Ming porcelain of the period of the Emperor Wan-li (1573-1619).