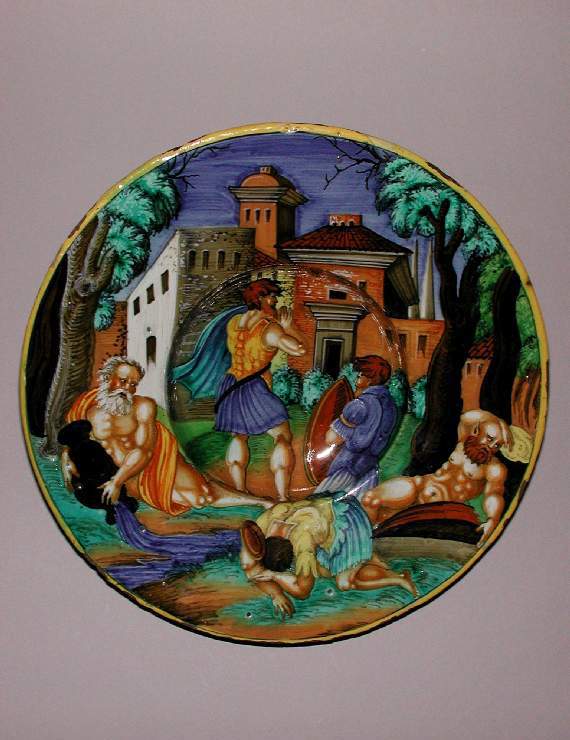 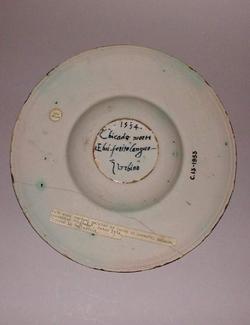 Maiolica broad-rimmed bowl, painted in polychrome with two warriors and a river god.

Broad-rimmed bowl. Buff earthenware, tin-glazed overall; the reverse off-white and tinged with green. Painted in blue, green, turquoise, yellow, orange, stone, brown, black, and white.
Shape 58 with two shallow concentric grooves under the edge. Circular with a wide, slightly sloping rim and small, deep well.
In the foreground, a grieving or dying warrior kneels, resting his head on his arms. Behind him, backing the viewer, a second warrior kneels with his shield in front of him, and to his left, another stands with his hands together as if in prayer. On the left, beside a tree, a bearded and draped river god reclines holding an upturned jar from which a stream of water flows into a river. On the right, a younger, bearded river god reclines on a bank with two trees behind him. Behind there is a group of buildings and two spires or obelisks. The edge is yellow. The back is inscribed in the middle in dark blue: '.1534./Chicado morte/Ehai .ferito langue - /I Urbino'. (He who falls dead and you have wounded languishes - in Urbino.).

Previously attributed to the painter who signed 'L'