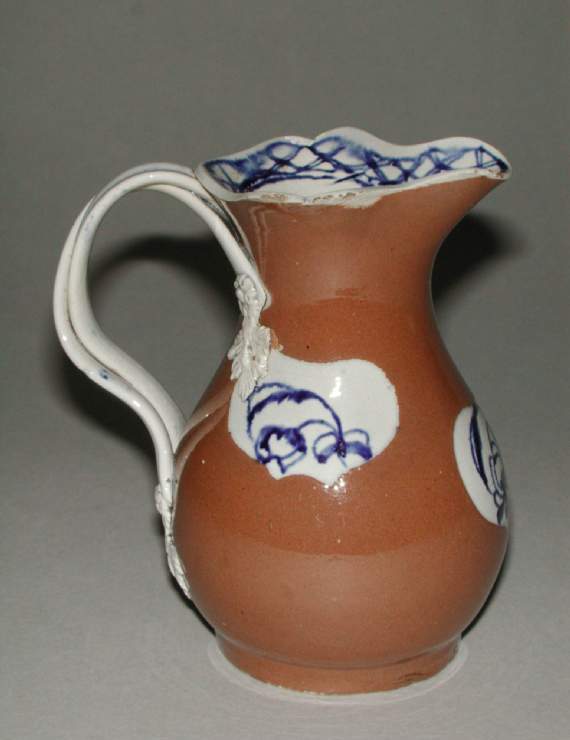 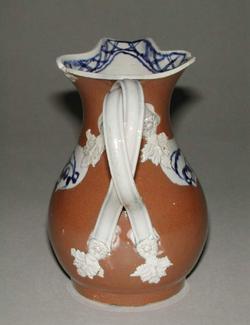 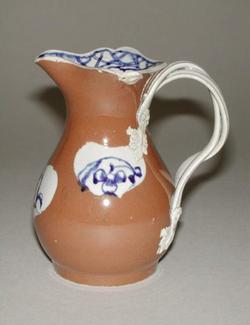 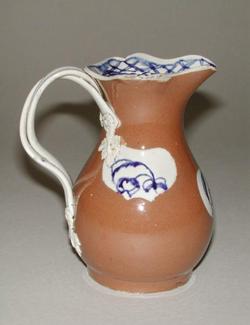 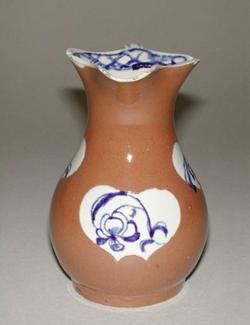 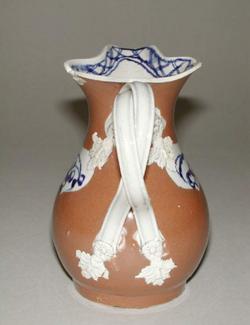 White earthenware decorated with brown slip and underglaze blue. The pear-shaped jug has a wavy rim with a projecting lip, and a double entwined strap handle with four flower and leaf terminals, two at the top of each strap and two at the bottom. The exterior of the body is coated in brown slip except for three reserves of roughly kidney-shape with two points on the lower edge, each painted in blue wth a stylized flower on a stalk. Inside the rim is a blue trellis border.

Given by Mrs F.H. Hinsley

Batavian ware was named after a type of Oriental porcelain which passed through the Dutch trading post at Batavia (modern Jakarta) in Indonesia during the 18th century. It had a brown ground and reserves painted either underglaze in blue, or in enamels. The English white lead-glazed earthenware versions have a brown slip ground, most examples being a darker brown than this jug. Batavian ware was formerly attributed to the Leeds Pottery, on the basis of a reference to them in Joseph and Frank Kidson's 'Historical Notes of the Old Leeds Pottery', 1892, but John Griffin (see Documentation) did not find evidence to support this while he was researching the history and products of the Leeds Pottery. However, it seems likely that it was made in Yorkshire or Staffordshire factory. The ware is uncommon, which suggests that it was not made in large quantities. Lois Roberts (see Documentation) concluded after studying Batavian wares were several types of decoration, that the 'Fuschia' pattern examples probably dated from around 1795.