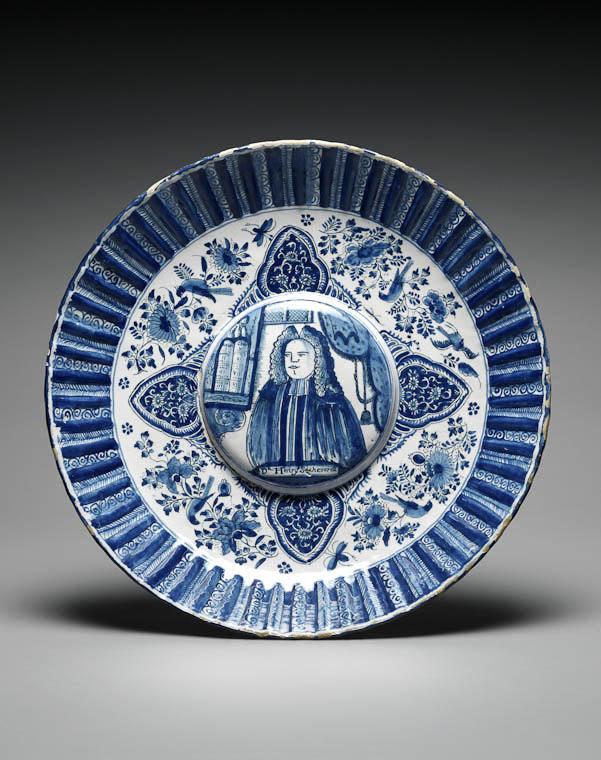 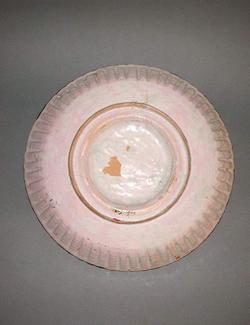 Buff earthenware, moulded, the front covered with very white tin-glaze, painted in blue under an application of clear, shiny 'kwaart'. The reverse has thick and uneven glaze. The circular dish has a convex medallion in the centre surrounded by a curved area, and a fluted border; on the underside it has a footring around the concave centre. The central medallion is painted with a half-length portrait of Dr Henry Sacheverall in front of a window with his name 'Dr Henry Sacheverell' written below on a label. On the right there is a looped up curtain, and on the left, a scroll bracket supporting a shelf bearing the tablets of the Commandments labelled 'EXOD I-IIII' and 'CH V-VIII'. The medallions is surrounded by lapets and arrangements of flowers, foliage and birds. The fluted border is painted alternately with stripes, feather pattern and scrolls

History note: Rackham's 1935 Catalogue of the Glaisher Collection gives the information that it was 'Stated to have belonged to a descendant of Dr Sacheverell, who declared it to be the only one made, the decoration being attributed to the divine himself'; bought in London at an unknown date by Dr J.W.L. Glaisher, Trinity College, Cambridge

Dr Henry Sacheverell (1674-1724) became a public figure in 1709 when he preached two controversial sermons: the Assize Sermon at Derby, and the Lord Mayor's sermon in St Paul's, London. The latter attacked the Whig government's tolerance of Dissenters (non-conformists). The government prosecuted Sacheverell and he was banned from preaching or holding a living for three years.

Probably made in London, but earlier it was thought that it might be Dutch because of the use of kwaart.

Moulding : Buff earthenware, moulded, the front covered with very white tin-glaze, painted in blue under an application of clear, shiny 'kwaart'. The reverse has thick, lumpy, and uneven glaze, which has been wiped off the footring
Tin-glazing 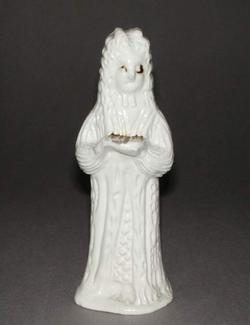 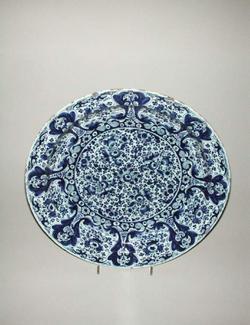 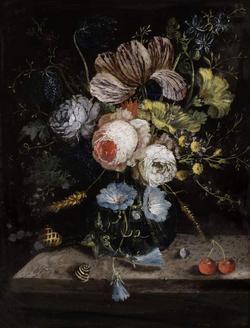 A vase of roses, convolvulus and other flowers on a marble slab 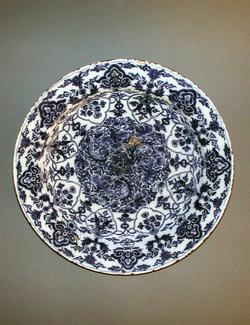