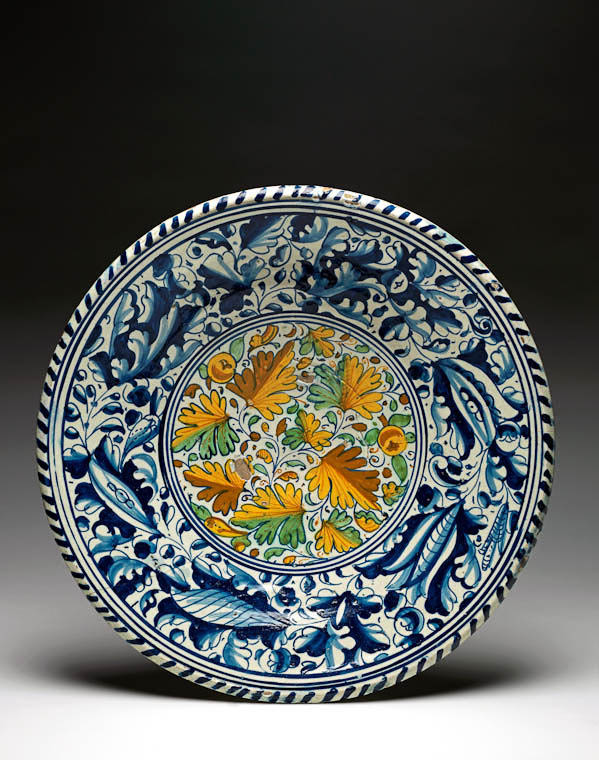 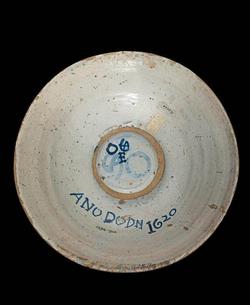 Tin-glazed earthenware painted with a central medallion of foliage in shades of green, yellow, and brownish-orange, surrounded by a wide band of blue foliage. Blue dash border.

Reddish-buff earthenware, the front tin-glazed, and painted in blue, green, yellow, and brownish-orange; the reverse tin-glazed grey with blue speckles. Decorated with a central medallion containing foliage coloured yellow and brownish-orange, or yellow and green, enclosed by three narrow concentric blue circles, and surrounded by a broad border of foliage, flowers and berries in shades of blue. The rim is encircled by three narrow concentric blue bands and blue dashes. The reverse is inscribed in blue 'ANO DODN 1620' and 'O A or L crossed over E'

History note: Sir Ashton Lever (1727-88) ; his Museum, Leicester House, Leicester Square, London; 1783 passed with the rest of the Museum by means of a lottery held by Sir Ashton to Mr James Parkinson and exhibited at The Rotunda, London; sold 1806 by Messrs King and Lochee; 5 May and ensuing 65 days; bought by Mr Roe,a clergyman of Bristol for his brother-in-law, Mr R.H. Clarke, Bridwell House, Uffculme, Nr Tiverton, Devon; by descent to J.W. Clarke; sold at Christie's, 13 February 1913, lot 61; purchased by Mr Stoner for £31.10 on behalf of Dr Glaisher.

Probably Netherlandish, or made in London. At the date of production potteries were operating at Pickleherring and Montague Close, Southwark

The wide blue border is similar to the foliage on pharmacy jars made in Antwerp in the late 16th and early 17th centuries.

Throwing : Reddish-buff earthenware, the front tin-glazed, and painted in blue, green, yellow, and orange; the reverse covered with thick greyish-tin-glaze; footring pierced by two holes before glazing which has filled them

Inscription present: the identification of the second letter is unclear 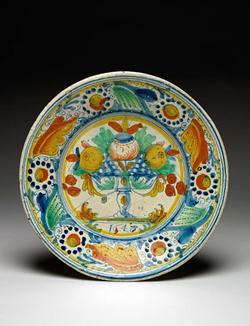 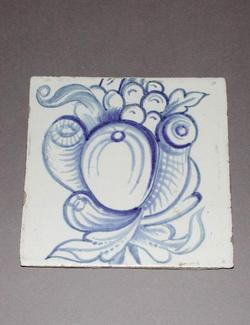 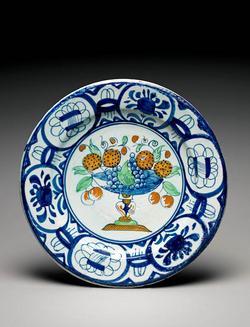