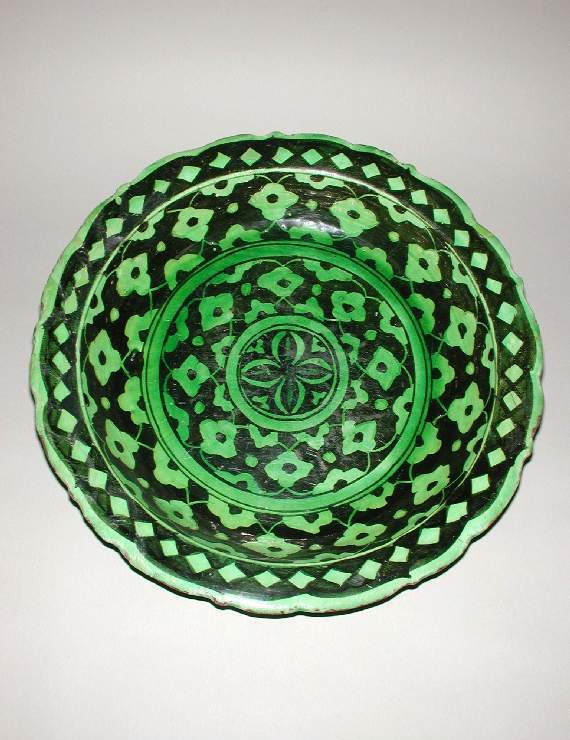 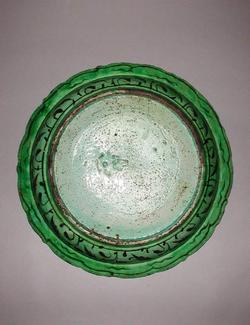 Fritware, moulded, painted in black or carved into black slip under a transparent green glaze.
Shape: segmental bowl, thickly potted, with flat, bracketed rim on a wide, very low foot ring.
Interior: on the lip a frieze of diamond shapes is painted in reserve against a black background. The upper edge of this frieze is bracketed, reflecting the rim shape. On the body, a frieze of lobbed medallions, framed above and below by half medallions, is carved into a thick black slip. Each medallion contains a black dot; they are joined by green lines and separated by green dots, reflecting the coloured glaze. The roundel is defined by black concentric lines; it contains a central rosette framed by further lines and a band of medallions identical to those on the body.
Exterior: on the lip a frieze of wavey lines is contained between a lower concentric line and an upper bracketed line, the latter reflecting the rim shape. On the body, a frieze of sprouting leaves and buds is painted within a pair of concentric lines. Another pair of concentric lines is painted on the base. The glaze runs over the foot ring unevenly, in places covering the rim; on the underside there is a thin, pitted green glaze.

Given by Lady Barlow

Method of acquisition: Given (1968) by Barlow, Lady

Moulding : Fritware, moulded, painted in black or carved into black slip under a transparent green glaze