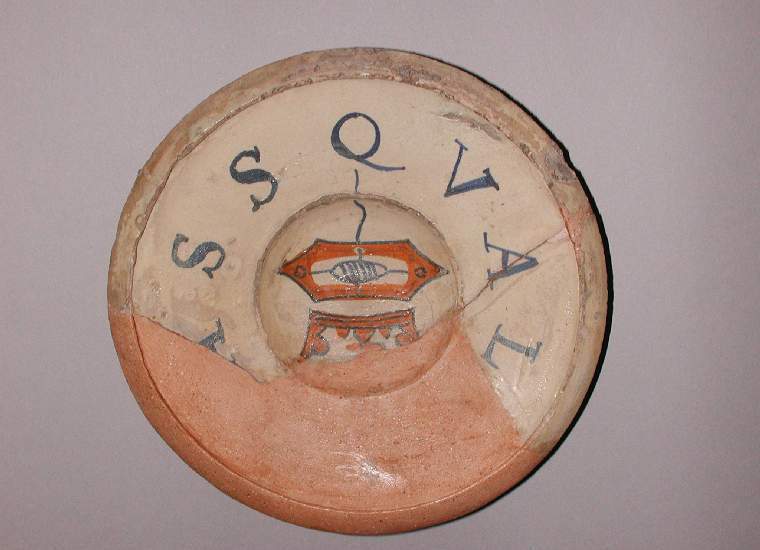 Renaissance maiolica plate, painted in blue and dark yellow with a shuttle and crown in the middle, and letters on the rim.

Buff earthenware, thickly potted and tin-glazed dark cream on both sides, except for the area inside the footring. Painted in blue and dark yellow. Shape 44. Circular with incurved edge, sloping rim and narrow central depression, standing on a footring. In the middle there is a dark yellow crown over a shuttle, and on the rim in spaced blue letters, `. A S S Q V A L .'.

The remaining letters on the rim indicate that the plate bore the name `PASSQUALE' (Pasquàle), possibly a monk or a weaver. A plate of similar shallow form, decora¬ted in the middle with a bow and arrow and inscribed on the rim `MA AGNELLINA' (Madre Agnellina) probably for a nun, was exca¬vated in Rome and is now in the Museo di Roma (MR 17692).

This plate does not bear a pencilled lot number, but can be identified securely as part of lot 185G in the Marcioni--Lucatelli sale held by Sotheby's on 16-17 February 1914. It was almost certainly one of the `27 glazed 15th cent. plates & bowls, said to have been excavated at Orvieto' which were purchased by H.S. Reitlinger on 9 December 1933 from the London dealer, Kerin. In view of the plate's provenance, it seems likely that all these were unsold lots from the sale, disposed of by Fenton the vendors' agent. Its presence in the Marcioni-Lucatelli collection . Its presence in the Marcioni--Lucatelli collection might indicate that it was made at Orvieto rather than in Lazio.

Tin-glazing : Buff earthenware, thickly potted and tin-glazed dark cream on both sides, except for the area inside the footring. Painted in blue and dark yellow.