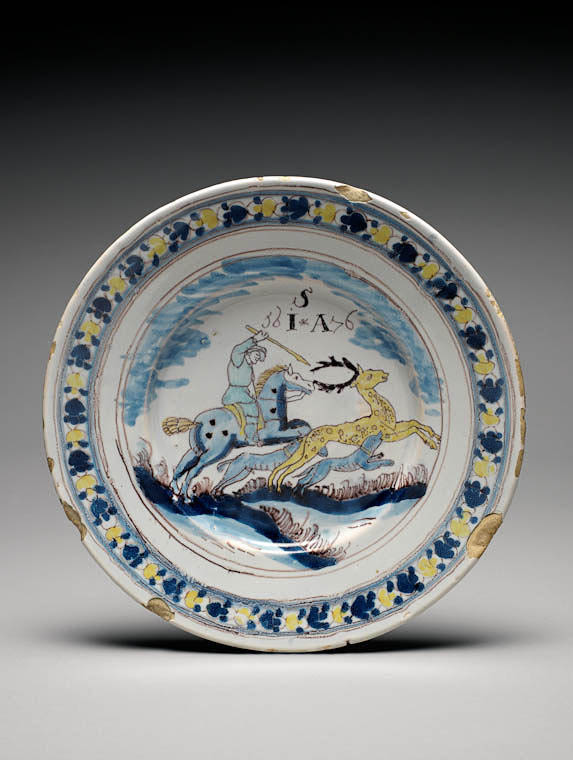 Buff earthenware, tin-glazed pale turqoise, and painted in pale and dark blue, pale turquoise-green, yellow, and manganese-purple. In the middle within two narrow manganese circles is a man on horseback holding a spear in his right hand, accompanied by two hounds chasing a stag towards the right. Above are the initials and date '16 S/I.A 76'. On the rim is a border of alternating yellow and blue stylized flowers between pale blue and manganese circles.

Probably made in Southwark, possibly at the Montague Close pottery. This is one of four plates known with analogous decoration. The Victoria and Albert Museum's plate has a label on it stating that the plates belonged to the Attfield family of Windlesham, and that 'The letters stand for Isaac and Sarah Attfield 1676 the date of their marriage.'. However, it seems more likely that the I stood for John Attfield of Windlesham, son and heir of James (d. 1683). The late Frank Britton could not find an entry in the parish registers between 1677 and 1695 for a John and Sarah Attfield, and suggested instead that the letters might stand for Jasper Scoles and Abigail Maude who were married at St Botolph's, Bishopsgate, London on 3 May 1676.

The stag hunt may have been inspired by an etching of mounted hunters chasing a deer by Antonio Tempesta, which was pl. 4 of his 'Hunting Scenes VI' of 1609. (Bartsch XVII, 167,1143), although the huntsman's arm is in a different position from the man in the print.