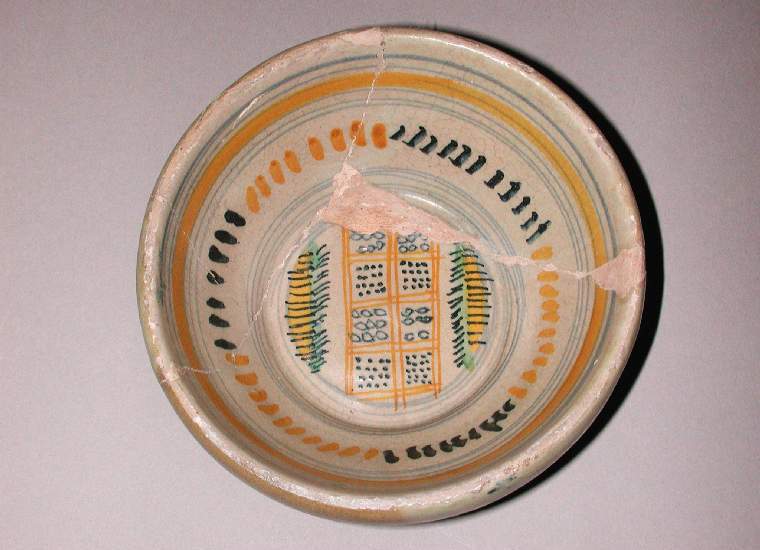 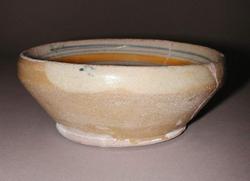 Earthenware, thrown. The interior is tin-glazed greyish-cream; the exterior lead-glazed pale yellowish-brown. Painted in dark blue, a little pale green, and yellow.
Shape 46. Circular with sloping sides, curving inwards at the top, standing on a solid base.
In the middle, within six narrow concentric blue circles, are eight yellow squares filled alternately with blue dots and small blue circles; above and below are a green and a yellow stripe with blue strokes over them. On the sides, three groups of short vertical blue strokes alternate with three groups of yellow, and below the rim is a wide yellow band between two sets of three narrow blue bands.

The bowl was probably among the '27 glazed 15th cent. plates & bowls, said to have been excavated at Orvieto' which H.S. Reitlinger purchased in 1933, some of which can be identified with lots in the Marcioni and Lucatelli sale held by Sotheby's on 16-17 February, 1914. It is therefore likely to have been made and found in Orvieto, although it is possible that one or other of the collectors acquired them elsewhere. This attribution is supported by the finding of bowls of this form in Orvieto at a pottery site adjacent to the Pozzo della Cava and at another further up via della Cava.