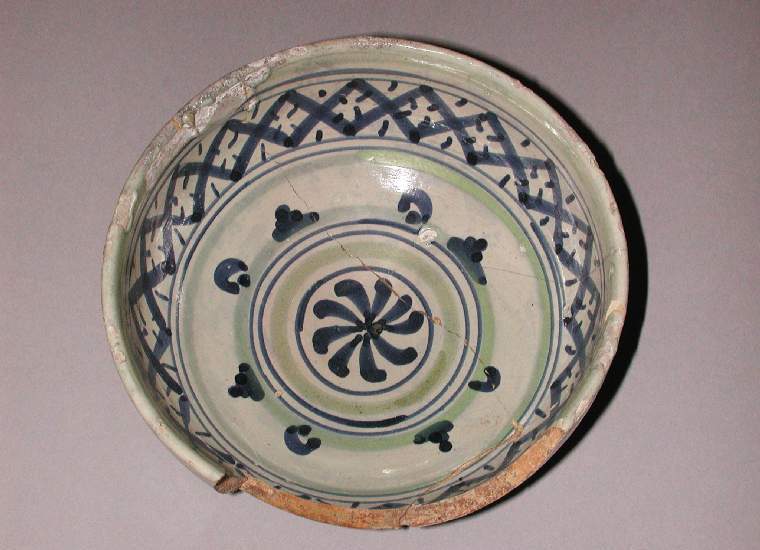 Renaissance maiolica bowl, painted in blue and green with a nine-petalled flower surrounded by concentric circles, and a border of continous lozenges.

Pale-buff earthenware, thrown and tin-glazed pale grey on both sides; the base and a little way above it unglazed. Painted in blue and pale green.
Shape 29 with slightly concave base. Circular with curved sides and disk base, concave underneath.
In the middle is a blue nine-petalled flower surrounded by concentric circles: narrow blue, wide green, two narrow blue, and a wide green with blue Cs and mounts outside it. Below the rim is a border of continuous lozenges with strokes in the spaces, with two blue bands and one green above and below.

The border pattern on this bowl is comparable to those found on many sixteenth-century plates and dishes from Deruta, such as C.57-1927, but although Oriveto imported pottery from Deruta, it seems likely that trivial vessels, such as this bowl were made locally. Bowls with similar central motifs, and a broad-rimmed bowl with a similar central motif and lozenge border have been recovered from butti (rubbish pits) in Orvieto.

Throwing (pottery technique) : Pale-buff earthenware, thrown, tin-glazed pale grey on both sides; the base and a little way above it unglazed. Painted in blue and pale green.
Tin-glazing