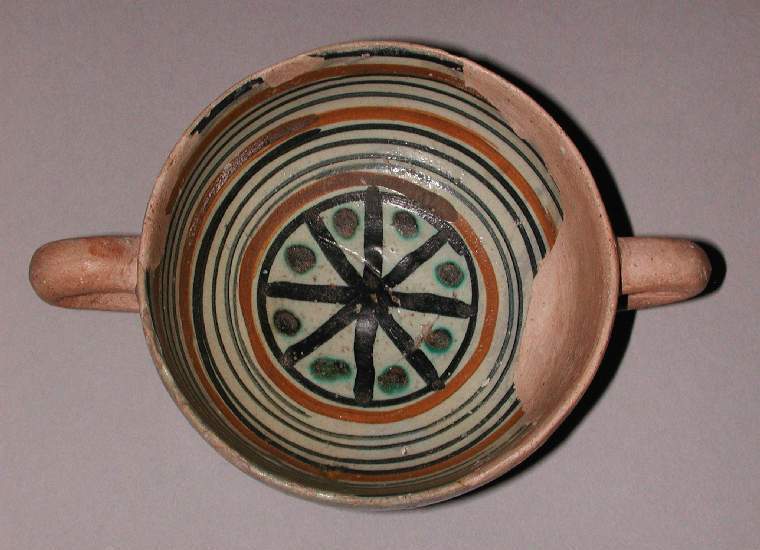 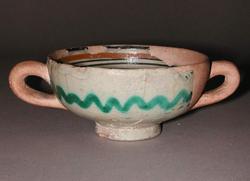 Renaissance maiolica two-handled bowl, painted in orange, green and black with a black wheel in the middle surrounded by concentric circles.

Earthenware, thrown with applied handles, tin-glazed greyish-cream on both sides; base unglazed. Painted in orange, a little dark green, and black.
Shape 45, but shallower. Circular with curved sides and two loop handles, standing on a narrow foot.
In the middle is a black wheel with green spots between the spokes; on the sides, concentric bands: orange, four black, orange, three black, orange and black. Outside, there is a wavy green line.

During the second half of the 15th century simply decorated two-handled bowls were made in immense quantities in central Italy, judging by the numbers extant. They are usually decorated in two or three colours with a central medallion containing a stylized plant motif, grid or spots, surrounded by concentric circles, and may have horizontal bands or fan-like palmettes or half-palmettes on the exterior. Large quantities of them have been recovered from butti (rubbish pits) in Orvieto. Similar motifs occur on a bowl and on the front of a jug found at a kiln site adjacent to the Pozzo della Cava, Orvieto.