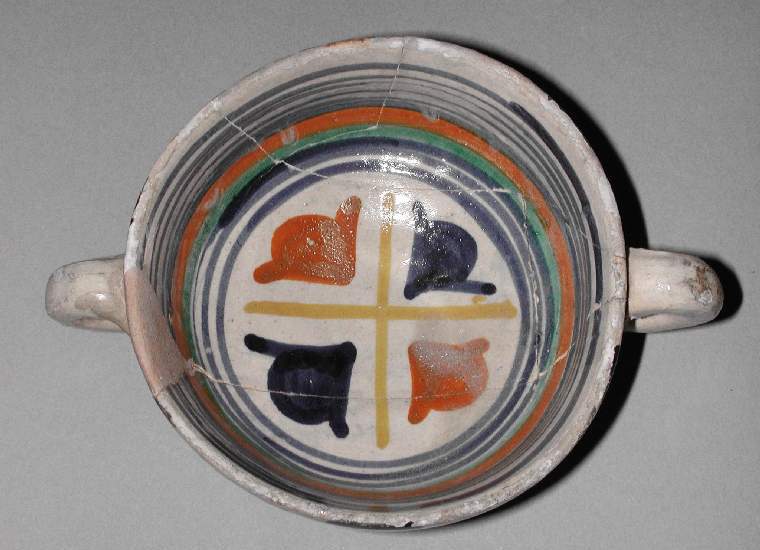 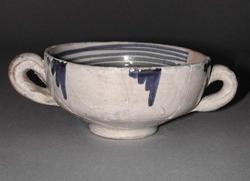 Renaissance maiolica two-handled bowl, painted in polychrome with a cross with trefoil leaves between the arms, surrounded by concentric circles.

Cream earthenware, tin-glazed cream on both sides; base unglazed. Painted in blue, green, yellow, and orange.
Shape 45. Circular with curved sides and two small loop handles, standing on a solid foot.
In the middle is a yellow cross with two orange and two blue trefoil leaves between the arms, surrounded by concentric circles: three narrow blue, a green, an orange and five blue. The outside of the rim is decorated with six blue half-palmettes or leaves.

History note: Purportedly excavated in Orvieto. Purchased from Kerin, London, on 9 December 1933 by H.S. Reitlinger (d.1950); the Reitlinger Trust, Maidenhead, from which transferred in 1991

.This bowl was almost certainly among the '27 glazed 15th cent. plates & bowls, said to have been excavated at Orvieto' which H.S. Reitlinger purchased in 1933, some of which can be identified with lots in the Marcioni-Lucatelli sale at Sotheby's on 17 February 1914. The bowl is therefore likely to have been made in Orvieto, although it is possible that one or other of the collectors acquired it elsewhere.

During the second half of the 15th century simply decorated two-handled bowls were made in immense quantities in central Italy, judging by the numbers extant. They are usually decorated in two or three colours with a central medallion containing a stylized plant motif, grid or spots, surrounded by concentric circles, and may have horizontal bands or fan-like palmettes or half-palmettes on the exterior. Large quantities of them have been recovered from butti (rubbish pits) in Orvieto and from a kiln site adjacent to the Pozzo della Cava in via della Cava.