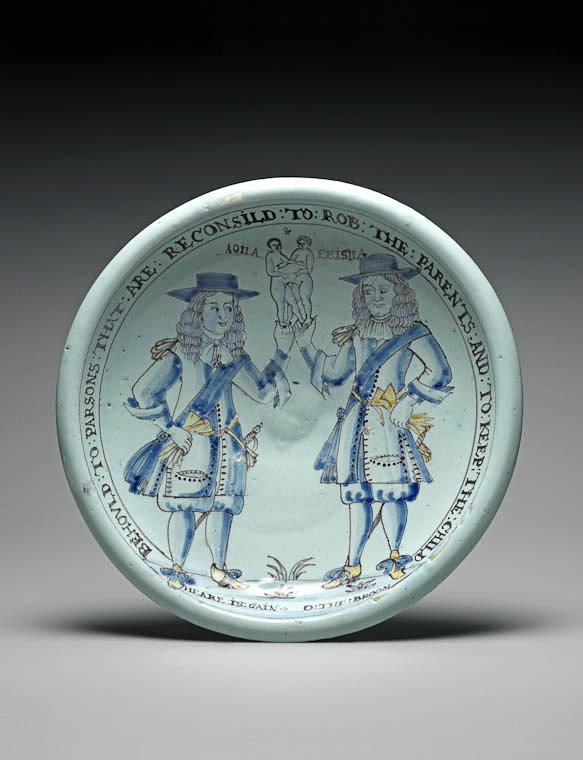 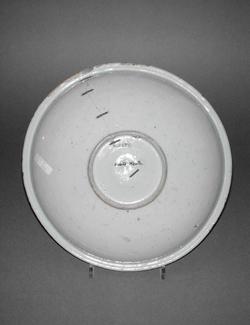 Earthenware tin-glazed pale duck-egg blue on both sides, and painted on the front in blue, dark yellow, and manganese-purple. Captain Henry Walrond and Sir Edward Phillips holding the joined twins Aqila and Prisila [sic] Herring, surrounded by an inscription

Dark buff earthenware tin-glazed pale duck-egg blue on both sides, and painted in blue, dark yellow, and manganese-purple. Circular with deep curved sides and slightly everted rim, standing on a narrow footring. Painted in the middle with two men, Captain Henry Walrond and Sir Edward Phillips holding the joined twins Aqila and Prisila [sic] Herring, flanked by their names 'AQILA' and 'PRISILA'. Below the men's feet painted in manganese-purple are the words ‘HEAREIS GAIN O THE BROOM’, and round the edge, between narrow manganese bands, 'BEHOLD TO PARSONS : THAT : ARE : RECONSILD : TO : ROB : THE : PARENTS : AND : TO : KEEP : THE : CHILD'.

The conjoined twins, Aquila and Prisila were born at Isle Brewers, Somerset on 19 May 1680. They were taken from their family by Captain Henry Walrond and Sir Edward Phelips (depicted on this charger) and exploited, displayed for profit, until their deaths a few years later. An analogous dish dated 1680 is in the collection of National Museum Wales (749).