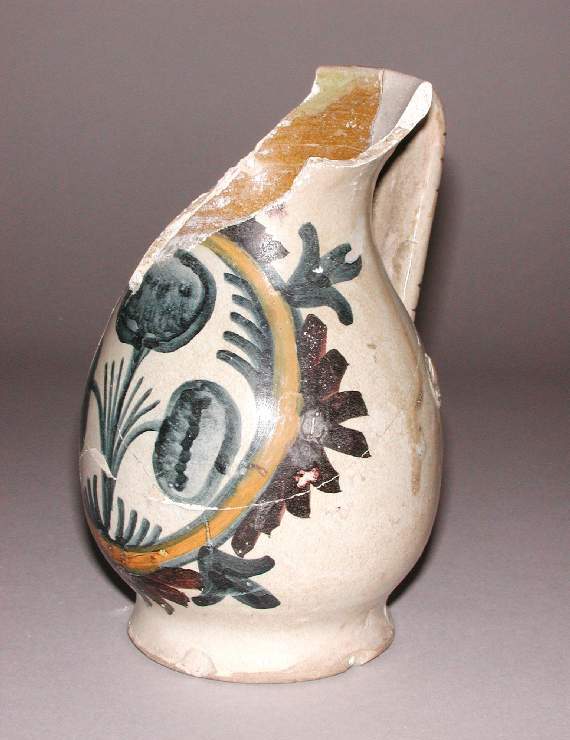 Renaissance maiolica part of a jug, painted in blue, yellow and manganese with, on the front, a stylised plant framed by a band.

Buff earthenware, thrown. The interior is lead-glazed yellowish-brown; the exterior tin-glazed greyish-white with streaks of brownish-grey; base unglazed. Painted in dark blue, yellow, and dark manganese.
Piriform, with slightly projecting base and broad strap handle; the front of the neck and spout are missing.
On the front is a stylised plant with three oval leaves or fruits, framed by an oval yellow band between narrow blue, with alternating blue and manganese leaves round the edge. The handle has two groups of three horizontal blue stripes.

Plants with kidney-shaped leaves or pomegranates and fan-like shoots were common on central Italian jugs during the late fifteenth and early sixteenth century, and some are attributed to the Romagna or Marches. W.B. Honey attributed this example to Faenza. However, its provenance suggests that it is likely to have been made in Umbria, probably at Orvieto, but comparable jugs were also made in Lazio. A waster jug decorated witjh a similar two-leaved plant and frame was found at a pottery site adjacent to the Pozzo della Cava, in via della Cava, Orvieto, active from around the mid fifteenth to the early sixteenth century.