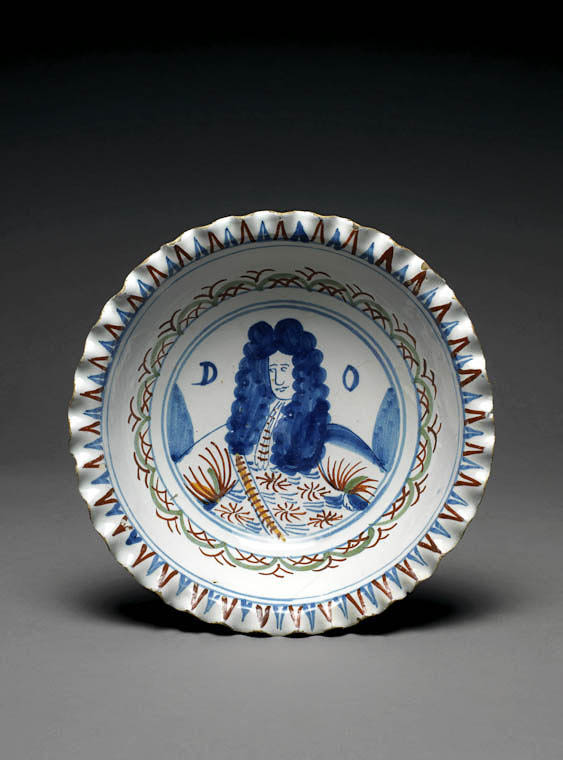 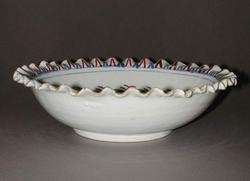 Tin-glazed earthenare painted in polychrome with a half-length figure of James Butler, 2nd Duke of Ormonde

Buff earthenware, thrown, tin-glazed and painted in blue, green, and red. Circular with a narrow pie-crust rim, and deep curved sides, standing on a footring. In the middle enclosed by two blue concentric circles is a half-lenth portrait of James Butler, 2nd Duke of Ormond (1665-1745), with on either side of his head the letters ‘D’ and ‘O’. This is surrounded by a border of interlacing green and red curved lines. The rim has a border of radiating green and red Vs.

History note: Bought in Hereford by the vendor, Mr Stoner of London; purchased from him for £4 on 4 November 1908 by Dr J.W.L. Glaisher FRS, Trinity College, Cambridge

The bowl was probably made at Brislington or Bristol. It is most likely to have been made about the time of his promotion to Captain-General of the English forces in 1711 in succession to the Duke of Marlborough. It seems unlikely that it was made after the Duke of Ormonde's involvement in the Jacobite rising of 1715, after which he went into exile on the Continent.

Throwing : Buff earthenware, thrown, with crimped pie-crust rim, tin-glazed, and painted in blue, green and red; three peg-marks on the underside of the rim
Tin-glazing