Buff stoneware with ovoidal body tapering towards the base, sloping shoulders, and a tapering cylindrical neck with slightly everted rim. Covered all over, except for the lowest part of the body and base, with a grey-green to dark-brown speckled glaze, with brush-stroke decoration in chestnut-brown of cattle, with a geometrical pattern around the neck. The body has bubbled in several places.

Given by the Very Rev. E. Milner-White, MA, DSO

Method of acquisition: Given (1947) by Milner-White, Eric

This vase was exhibited by Staite Murray at a solo exhibition of his work at Paterson's Gallery, London, in November 1928. Reviewing the exhibition in The Times, a critic refers to this vase as follows: '...[another vase] is decorated with a summary brush drawing of the bird, but it is not more than a comment on what is already felt in the movement of the shape as compared with that of the other. Other examples of this pointing of a formal tendency inherent in the whole shape, colour, and surface of the piece are "Cow" - which says "Moo!" as plainly as a pot can speak - " 'Stoneware Pottery' in The Times, 3 November 1928, p. 17.

Inscription present: pentagonal seal with M with a dot above and below

Ploughing: Study for 'The Mantle of Elijah' 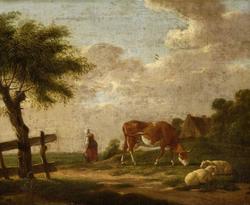 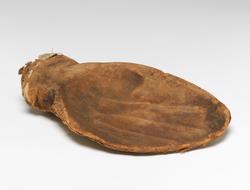 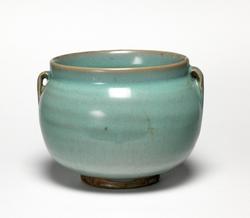