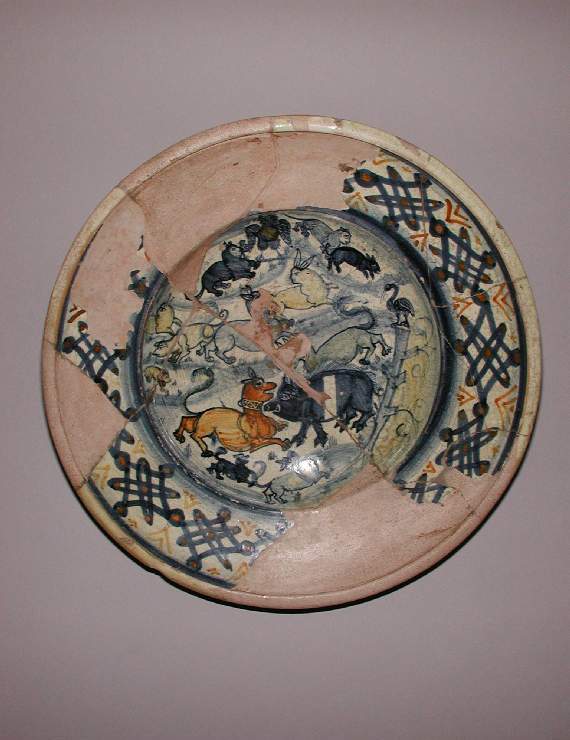 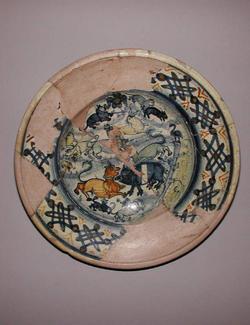 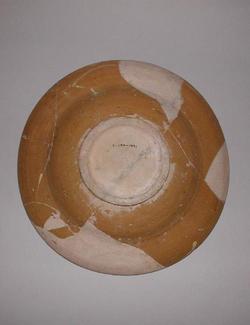 Pinkish-buff earthenware, thrown, tin-glazed yellowish-white on the front; reverse lead-glazed brownish-yellow; footring and base unglazed. Painted in dark blue, pale yellow, and brownish-orange.
Shape approximately 61. Circular with deep, steeply sloping rim and wide curved well, standing on a footring pierced by an incorrectly placed suspension hole.
In the well, four hounds are attacking a saddle-backed boar. On the right is a stylised tree with a bird above it and at the top are three rabbits, two lions or cats, and an eagle. On the rim, between wide blue bands, there are crossed ellipses over lozenges with orange spots on their points, and orange Vs in the spaces.

History note: Either Avvocato Arcangelo Marcioni (1859-1928) or Cavaliere Capitano Ferdinand Lucatelli (b. 1862); whose collections were sold, without indication of which pieces were from which collection, by Sotheby's, 17 February 1914, Catalogue of the collections of early Italian pottery formed by Signor Avvocato Marcioni and Cavaliere Capitano Lucatelli of Orvieto, lot 267 & pl. V. Cecil Leitch & Kerin Ltd, from whom purchased in October 1932 by H.S. Reitlinger (d. 1950); the Reitlinger Trust, Maidenhead, from which transferred in 1991.

The design of this dish was probably inspired by a late fifteenth-century Florentine print, such as the 'Pattern Plate of Birds and Beasts Hunting and Fighting' by an anonymous master. The shape of the dish is comparable to the large Deruta dishes known today as piatto di pompa, although it is smaller and the rim is steeper and more curved. Its condition indicates that it has been excavated and its presence in the collection of either avvocato Arcangelo Marcioni or cavaliere capitano Ferdinando Lucatelli of Orvieto suggests that it is likely to have been made in Orvieto or elsewhere in southern Umbria or perhaps northern Lazio. However, pottery from Deruta was imported into Orvieto, and in view of the popularity of hunting scenes on later Deruta dishes, it might well have been made there. The rhomboidal knot motifs on the rim also seem to point to Deruta. The execution on the other hand is less accomplished than the painting on Deruta maiolica. 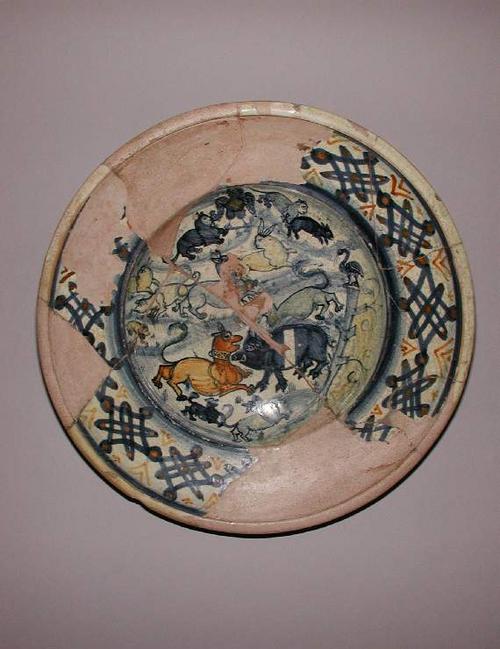