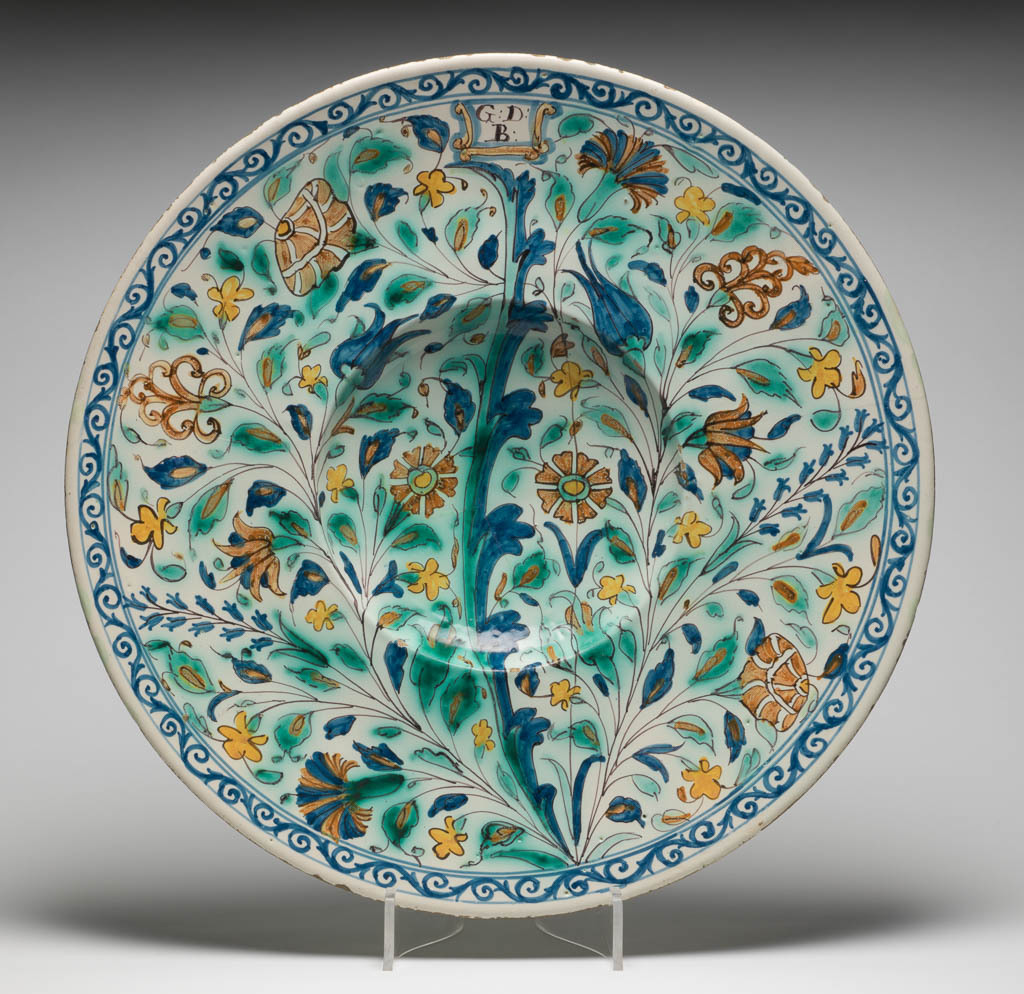 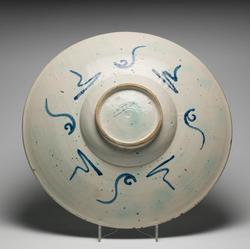 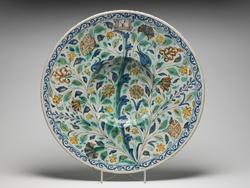 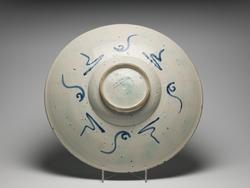 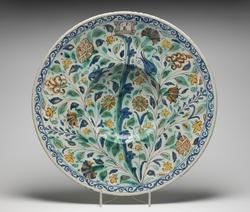 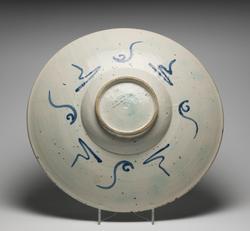 Maiolica dish, painted in blue, green, yellow, and orange in Isnik style with sprays of foliage and flowers on either side of a saz leaf.

Pale yellowish-cream earthenware, tin-glazed overall; the reverse scattered with pin holes and tinged with green. Painted in blue, green which has run, yellow, and orange, with manganese-purple outlines.
Shape 62. Circular with wide, slightly concave sloping rim and small curved well, standing on a footring.
Sprays of foliage and flowers including roses, hyacinths, carnations, tulips and lilies on either side of a saz leaf, all springing from the same point at the bottom of the rim. At the top, the initials 'G:D:/B:' are inscribed in a rectangular scrolled frame. Round the rim there are two narrow blue bands, continuous scrolls and another blue band. The back is painted in blue with four elongated Ss separated by four squiggles each resembling a '3' with an extra backward stroke at the top.

This unusually large dish is decorated in the style of Isnik pottery of about 1570-1600, which featured exuberant floral designs in blue, emerald green, black and vivid 'sealing-wax red'. Exports of this splendid Ottoman ware to Italy must have been considerable, because it was there that many pieces were found by nineteenth century collectors such as Charles Drury Fortnum. Dated dishes show that maiolica influenced by this class of Isnik pottery was being made by the second decade of the seventeenth century, probably at Padua. The earliest known dated example is of 1613. The earliest dish with a large central 'saz' leaf in the design and blue squiggles on the back resembling those on the Fitzwilliam's dish, is dated 1633. This dish, now in the Musée National de Céramique at Sèvres, is inscribed `S. Chandiana', for a nun, Suora (sister) Chandiana. The first nineteenth century publications of that dish missed out the `h' and consequently the whole class became known as `Candiana ware' and was thought to come from Crete, known earlier as Candia. The latest recorded dish, in the Ca' Rezzonico, Venice, is dated 1705. Isnik style decoration has also been recorded on ewers, bowls and vases. The discovery of fragments of Isnik style maiolica including wasters, during an excavation in 1982 on the site of the Manardi factory at Bassano, indicate that it was also made there during the second half of the seventeenth century.

Decoration composed of high-temperature colours ( blue, green which has run, yellow, and orange, with manganese-purple outlines)

Tin-glazing : Pale yellowish-cream earthenware, tin-glazed overall; the reverse scattered with pin holes and tinged with green. Painted in blue, green which has run, yellow, and orange, with manganese-purple outlines.