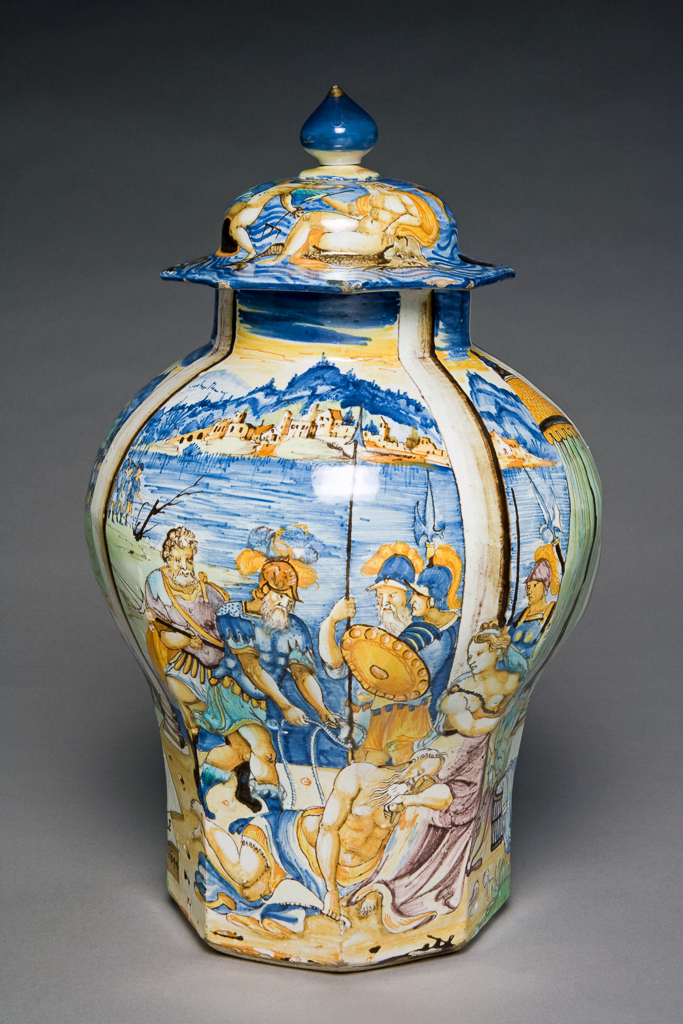 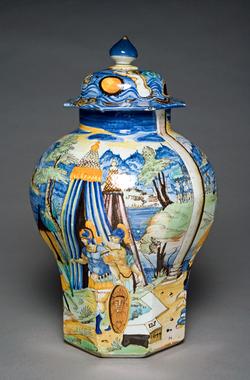 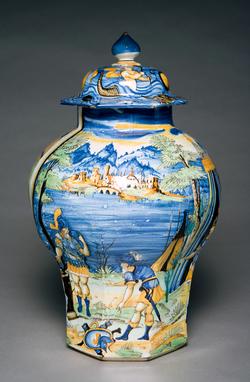 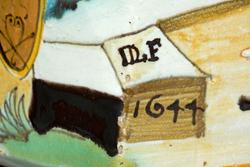 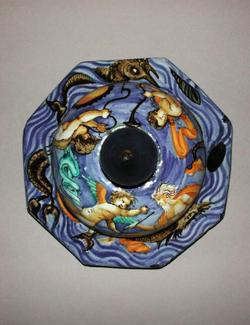 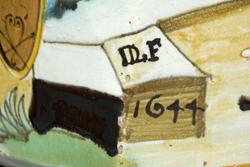 Baluster vase and cover of tin-glazed earthenware painted in polychrome with a scene from the story of Samson and Delilah, Signed and dated DLF/1644

Pale buff earthenware, tin-glazed off-white on the exterior, and more thinly and unevenly on the interior; base unglazed except for a few small dribbles. The glaze on the interior is tinged with green, and the glaze under the cover has crawled in two places. The vase is painted in blue, green, yellow, orange, beige, brown, manganese-purple, black, and white high-temperature colours. Baluster-shaped with octagonal lower part, and octagonal cover, domed in the centre, and surmounted by a cone-shaped finial which is a replacement in hard-paste porcelain held on by a dowel. The sides are decorated with a continuous scene of Samson and Delilah with in the background, a lake (or the sea), buildings on islands or the shore, and distant mountains. Samson with the ass's jawbone in one hand, lies asleep against the knees of Delilah, who holds a pair of scissors, and has already cut off some of his hair. Behind her are five Phillistines dressed in Roman style armour, one holding a rope to bind Samson. On the right there are two columns and a tent, and on the left, a column and behind it in the distance, a troop of soldiers. On the other side there is a standing soldier on the extreme left, some armour on the ground, and a man to its right pointing towards it. Further to the right are two standing soldiers, one resting his arm on a shield. Behind him are three tents. On the ground to the right of the man wth the shield, there is a stone block inscribed 'DL(joined) F/1644'. The cover is decorated with blue waves on which there is a mermaid holding a torch, a triton, Neptune reclining on a fish with a putto in front of hime, shells, and a large fish. The finial is blue with remnants of gilding.

History note: An unidentified house sale in Norfolk; Mr Wordingham of Norwich, by whom brought to Dr J.W.L. Glaisher in Cambridge on 17 June 1920, and sold to him for £25.

The knob on the cover is a replacement made of porcelain.

Inscription present: the L is written over the D